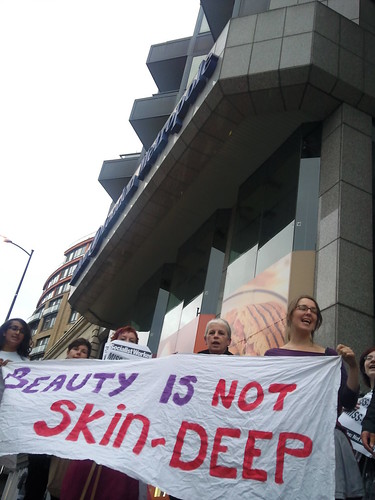 Reports on Monday evening’s protest against the Miss England beauty pageant are now up at Mind the Gap: London Student Feminists and Soloman’s Mindfield.

Many people stopped to talk and join in. Got some really good contacts from young angry women who were just passing by. ‘Damn straight it’s sexist’ said one. Loads of men also stuck around. A lovely old woman in hijab chanted with us too. A car full of teenage girls with their mum hooted and waved.

Here’s another a picture on the Evening Standard website.

Meanwhile, U.S. based Bitch Magazine blogger Mandy asked, Is This Feminism at work?

See, the winner is twenty-year-old Rachel Christie, a heptathlon competitor who’s goal is to win the 2012 Olympic Games in London. She happens to also be the first Black woman to win the competition.