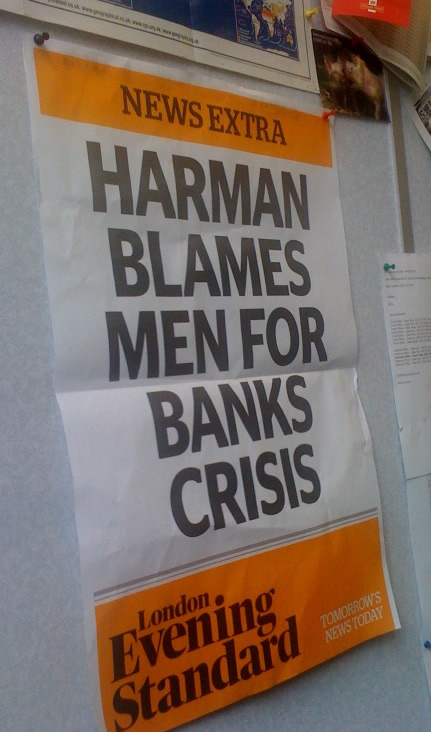 Daily Mail has a reaI doozy of an editorial on the unfolding media hysteria over Harriet Harman’s week in charge of the country while Gordon Brown is on holiday (or, as the Mail headline writer put it “Seven days of feminist fantasies”):

Harriet Harman has been acting Prime Minister for only a week, but in those seven days she’s unleashed a veritable blitzkrieg against the male sex.

That’s the lede. The whole editorial is a sort of backlash must-read, but this line is probably the low point:

Scarce resources are being diverted to silly ideas like compulsory lessons in domestic violence.

After all, two women a week are murdered by their current or ex male partner, and one in four women will experience domestic violence during her lifetime in this country. What a “silly” thing for Harman to want to spend those precious resources on! That’s pretty fucking cold, even for the Mail.

All this has spiralled out of an interview Harman did with The Times.

Here’s some of what she actually said:

But the battle for equality goes on — for Labour in general, too. Harman feels strongly that voters are fed up with “boys running the show” and is convinced that every big organisation needs women at the top.

“Men cannot be left to run things on their own,” she explains. “I think it’s a thoroughly bad thing to have a men-only leadership. In a country where women regard themselves as equal, they are not prepared to see men just running the show themselves. I think a balanced team of men and women makes better decisions.”

Harman is deadly serious about this. I was recently told that when she first took up her post — in fact, she holds several, including minister for women and equality — in 2007, she secretly tried to change the party’s rules to formalise this principle. She apparently proposed that either the party leader, or the deputy, should be female.

She nods: “We haven’t actually effected a rule change, but I don’t ever think there will be a men-only team of leadership in the Labour party again. I think people would look at it and say, ‘What? Are there no women in the party to be part of the leadership? Do they want to do it all themselves?’ It just won’t happen again.”

This will certainly prompt a bit of groaning, especially from those who criticise Harman’s relentless focus on egalitarianism. But she is used to sticking her neck out. She recalls a “hell of a row” over her ultimately successful campaign for all-women shortlists in the Labour party, but believes she has been proven right. While almost a third of Labour MPs are women, the Tories, who have steered clear of all-women shortlists, have just 18 female MPs.

The contentious, and possibly a bit unfortunate, phrase was “Men cannot be left to run things on their own”. I doubt this is how Harman intended it, but the problem is this suggests stereotypes of men as incapable cretins.

The unusual thing, and what has caused all the commotion, is that this stereotype has been invoked in relation to politics and the economy, i.e. areas where men don’t like being portrayed as cretins. It’s a stereotype that is quite happily trotted out in other contexts – as Sady Doyle said in the Guardian this week:

The average straight man, if dating guides for women are to be believed, is a fragile, delicate flower, ravaged by primitive desires beyond his control, needy to the extent that he requires constant, fawning admiration (but not too much – the idea that a woman is actively pursuing sex or a relationship will scare him, as he is a skittish creature) and absolutely incapable of dealing with any sort of criticism or challenge from the women in his life. This is conveyed in the movie in a scene where Mike reveals that his macho front is a put-on, caused by dating women who “didn’t like him”. (The question of why on Earth he deserves to be liked is neither asked nor answered.)

Sexist tropes often play on infantalising straight men (and by contrast painting women as mother figures, who are doing all the housework, for example, because men just aren’t capable of doing these things for themselves). This is (I think), which Laurie is getting at when she talks about Harman’s statement as misandry:

It’s true that pizza boxes were not left strewn around parliament during the centuries of male-only and then male-dominated government. But it’s also true that the needs of everyone but wealthy white men were (and still are) put second, that everyone else’s basic rights had to be pried from the reluctant grip of this elite.

Laurie says that the point is in a truely meritocratic society, the top jobs in government will generally go in roughly equal fashion to women and men. I agree of course; a male-dominated government is a symptom of a sexist culture. And it’s important to emphasise that we’re a long way off from a ‘meritocracy’. The concept that we are selecting the ‘best candidate for the job’ when it comes to running the country, or running the economy, relies on a bunch of assumptions we know to be false, like everyone has equality of opportunity, and no-one discriminates on the basis of gender, race, sexuality, etc.

Although Harman’s choice of words wasn’t the best, perhaps, it’s interesting to observe the knee-jerk reactions to making some quite uncontroversial points about the need to increase female representation in government. As Yvonne Roberts said in the Guardian:

The idea that the individuals running an organisation ought to reflect the market that the organisation is trying to serve is increasingly common practice (ie it generates profits) in the commercial world – so why is it deemed such a revolutionary concept in politics?

Much more change will be needed than just more representative government, I agree with HarpyMarx. But it would be a start.

(Photo credit to my work friend Selina who has pinned this up on the wall of our office :-))