Things to know about the history of UK immigration laws 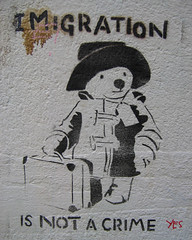 What is the history of the UK’s immigration laws? Rahila Gupta has a piece in the Guardian’s CIF today.

She puts the recent effort to reduce forced marriages by the UK government, by ruling that you have to be at least 21 to get a spousal visa, in a historical context.

Gupta describes a series of racist and sexist, and plain stupid policies pursued by successive governments:

We have been here before. In 1969, Labour blocked the immigration of non-British husbands on the grounds that it could threaten the job prospects of indigenous men – a move that was both racist and sexist as it assumed that women did not enter the jobs market. In 1974, the law had to be changed because of the number of white women who were unable to marry foreign spouses of their choice. In 1980, the Conservatives restored a ban but qualified it in such a way that it would not affect most white women wanting to marry foreign men.

Particularly illuminating that it was the impact on white women that forced a change in this policy, and then the Tories re-introduced the policy with changes meant to more accurately make sure white people were not affected.

Previously the concern was that of “bogus marriages” being contracted simply as a route into this country. The “primary purpose rule”, introduced in 1980, required incoming husbands to prove that the main purpose of marriage was not to gain admission to the UK. The then home secretary of a Conservative government, William Whitelaw, believed that in Asian society, it was the woman who moved to her husband’s home. On this basis many Asian men who applied to join their wives in the UK were refused entry on the basis that a man would not move to join his wife unless his main reason for moving was to migrate to the UK.

“You’re not conforming to my stereotype, I can’t be wrong, you must be lying! Entry denied!”

Similarly stereotypical assumptions about Asian culture led to the notorious but thankfully short-lived attempts by immigration officials to ascertain whether women coming to the UK for purposes of marriage were virgins. Women were subjected both here and on the Indian subcontinent to medical examination of the state of their hymens in the 1979 and 1980 until community protests forced the government to end the practice.

Good to know that the government in 1979-80 were fully prepared to put women through a medieval-style “virginity” test, didn’t know jack about hymens, and thought no Asian couples EVER got married if the woman wasn’t a “virgin”.

Obviously, this is only a small slice of the oppressive history of UK immigration laws, from the 1905 Aliens Act onwards.

Photo by daveknapik, shared under a Creative Commons license