When we talk about the foremothers of feminism on this blog, all too often we skew towards UK history and UK feminism. I’ve just finished reading Mario Vargas Llosa’s novel, The Way to Paradise, a double biography of French-Peruvian feminist socialist Flora Tristan (1803-1844) and her grandson, the post-Impressionist painter Paul Gauguin.

The book switches chapter by chapter from Tristan’s perspective to Gauguin’s perspective. Both characters are approaching the end of their lives, looking back on their own history in vivid glimpses. Unfortunately, I don’t know enough background to judge how closely Vargas Llosa stuck to Tristan’s or Gauguin’s real history, so take what follows with that in mind, but it’s nonetheless a fascinating sketch of Tristan’s life – I’ve got her book Peregrinations of a Pariah on order, so that might shed some more light on at least some of the story. (I’m going to base the rest of this review on Vargas Llosa’s account).

On the one hand, you have Tristan’s story: at 17, she married her boss, the engraver Andre Chazal, who turns out to be abusive and alcoholic. She escapes pregnant with her third child, leaving Chazal, even though at that time she could not legally seperate from him, and risking prison for abandoning him. In an effort to support herself and her children, she takes a job as a maid, and the treatment she receives means she begins to come into a consciousness of how class and gender oppression operate. She travels to Peru, to try to (although she ultimately failed to) claim her inheritance (her father was Peruvian Colonol Don Mariano Tristan y Moscoso, from the wealthy and influential Tristan family), not disclosing to them that she’s married or that she has children. When she comes back, Chazal tries to murder her.

And that’s even before she becomes a socialist feminist. She goes on to propose a mass union of workers, meant to unite women and male workers in a struggle against oppression. She takes a tour of France, organising small meetings of workers where she explains her ideas and tries to get committees started to advocate for her Workers’ Union.

Of interest from a UK perspective, at one point she makes a trip to London, where she dresses as a man to document the terrible conditions experienced by prostitutes in the city. You can read the 1840 article she wrote about women’s position in London linked at Philobiblon. 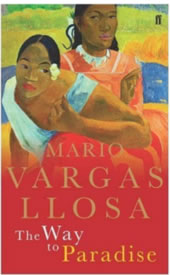 On the other hand, you’ve got Gauguin, riddled with syphilis which makes his legs rot, among its many symptoms, yet which doesn’t prevent him sleeping with and very likely passing the disease on to a series of young Tahitian women and girls, just for starters.

Who do you think Vargas Llosa manages to make a more sympathetic character?

Particularly when reading Gauguin’s chapters, the decision to narrate the story entirely from the two main characters’ perspectives became a problem for me.

Gauguin’s attitudes to Tahitian and Marquesan women were maybe ‘not as bad’ as the French and other colonisers, in that Gauguin has a mission to stop the destruction of the Tahitian way of life, and strongly opposes the Catholic and Protestant churches’ desire to get rid of traditional practices such as tattooing and erradate Mahu third gender identities, but his ideas about the ‘noble savage’ and the way in which he Others and exoticises Tahitian people in his writing and paintings are not always comfortable reading and viewing.

I felt the book was crying out for an injection of the perspective of, for example, one of the teenage girls he persuades to come and live with him and paint. But Vargas Llosa never lets us in on the perspective of any of the Tahitian women or girls that Gauguin exoticises, idealises and ultimately Others, and rarely gives any insight into how they saw his paintings, except for (very occasional) snippets of conversation. The only time the focus in on the thought process of the two main characters is broken in the entire novel is when we’re given a brief insight into another French coloniser.

(Incidentally, it turns out the Tate is planning a Gauguin retrospective, so these questions will hopefully be examined further later…)