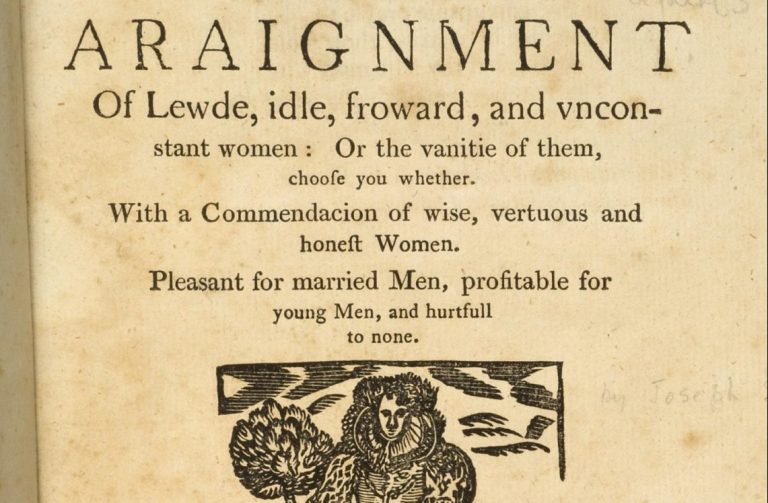 Where does the word misogyny come from?

Misogyny is now in common usage to describe hatred towards women, but what is the origin of the word? On the Issues has posted an interesting article looking at when the word misogyny first began to emerge in English.

It’s somewhat older than the term sexism, which was very likely coined in 1965, by Pauline M. Leet, through a direct comparison to racism.

The tract that precipitated the introduction of “misogyny” to the language was Joseph Swetnam’s 1615 attack on women, colorfully titled The Arraignment of Lewde, idle, froward, and unconstant women: Or, the vanitie of them, choose you whether.

Swetnam minces no words in his tirade against women. Chapter 1, “Moses describeth a woman thus: ‘At the first beginning,’ saith he, ‘a woman was made to be a helper unto man.’ And so they are indeed, for she helpeth to spend and consume that which man painfully getteth. He also saith that they were made of the rib of a man, and that their froward [difficult] nature showeth; for a rib is a crooked thing good for nothing else, and women are crooked by nature, for small occasion will cause them to be angry.”

Swetnam forges on with book-length alliterating abuse and jest, all at the expense of women. “[S]he was no sooner made but straightaway her mind was set upon mischief.”

The Oxford English dictionary cites 1656 as the first use of “misogyny” in English, an error then repeated by William Safire in his New York Times column. In fact, the first use in English was during the Swetnam controversy four decades earlier when opponents nicknamed Swetnam and his followers “Misogynos.”

Hutchins highlights that misogyny is prevelant in literature (and, of course, history) the whole time, but she contends it was only named once a significant “push-back” began:

Misogyny acquires a name only insofar as it receives more than the occasional push-back. Without the active awareness and engagement of men and women who both recognize and criticize the subordination of women, misogyny appears in English language literature and arts as proverbial truth, cultural inheritance and natural fact.

It would be interesting to compare this to the development of terms used to describe discrimination against and hatred of women in other languages, if anyone has any suggestions on this please pipe up in comments…

The feature image is an excerpt of the front page of the original The Arraignment of Lewde, idle, froward, and unconstant women.