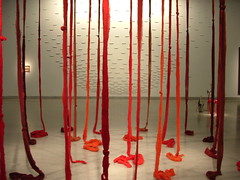 She profiles some interesting examples of ‘menarchy’ from “bleed-ins” beginning in 1973 and a Judy Chicago lithograph of a woman removing her tampon to Ingrid Berthon-Moine’s recent series of photographs of women wearing their menstrual blood as lipstick (really, there’s a photo on online version of Kira’s piece).

‘Menarchy’ isn’t exactly new, then, but Kira posits that the type of activism has changed over time:

These days, says Bobel, activists often bypass engagement with corporations and concentrate on DIY approaches, setting up businesses that sell reusable sanitary products for instance. This reflects the punk and alternative roots of the current movement. Where the hippy/spiritual wing of 70s feminism might once have composed celebratory songs to the lunar cycle, recent activists are more likely to dress up as a bloody tampon and perform a cheer: “Smear it on your face and rub it on your body, it’s time to start a menstrual party!” 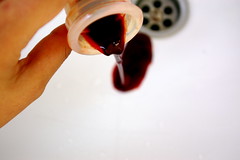 Kira suggests that activists focusing on the period-taboo could come across as “not just… navel-gazing, but of setting their sights quite literally lower”. But clearly the shame and embarrassment many women feel about their periods relates to a deep vein of shame around and hatred of women’s bodies. Not to mention the way that menstruation has been used to silence and belittle women (jokes about PMT come immediately to mind as well).

Kauder Nalebuff’s book stemmed from her own first experience of menstruation – waterskiing in a yellow swimsuit with her grandfather. She thought this was a truly “terrible story”, but when it was shared with her family, it was brought into stark perspective. Her great aunt Nina revealed that her first period arrived as she was about to be strip searched while fleeing Nazi-occupied Poland, and “the most powerful part,” says Kauder Nalebuff, “was that she had never told anyone about this before. I started asking other women in my family about their first periods, and I found it was an electric topic.” She sees her project “as a segue for women to talk openly about their family history, their bodies. Really important issues.”

Photos by ajisabel and gaelx, shared on Flickr under a Creative Commons license