There’s a new anarcha feminist group being set up in Edinburgh! The group want to collaborate with other groups and feminists from around the UK.

One of the first actions is a planned ‘femmestruation’ week for 13th-20th February 2010:

Organised by the anarcha feminist kollective in Edinburgh, we present to you a week long period in Edinburgh! And the week is like a period- it begins heavy, and ends light!…We are at the early stages of planning this event but so far the week will begin heavy with lectures on menstrual politics such as the environmental impact of sanitary products and such discourse and workshops will run such as a craft making workshop of DIY make your own sanitary products. Band and comedy nights will run taking on a positive approach to the period with such amazing radical performers as Chella Quint (www.chartyourcycle.co.uk)

At present we are organising the committees in fundraising, publicity, food/drink, and lectures/workshops, so please join us!

The next meeting of the group is this monday 19th October at 5pm in Edinburgh, at the Forest cafe on Forest road. 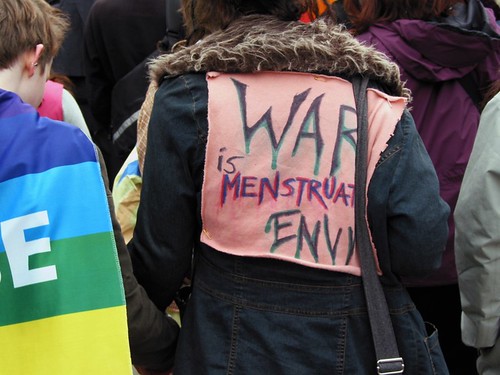 First photo by the_justified_sinner used under a Creative Commons Licence.

Second photo by designwallah used under a Creative Commons Licence.