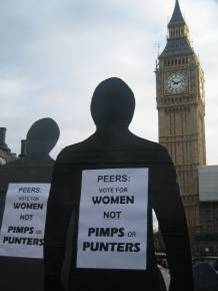 A major piece of legislation was given Royal Assent and signed into law yesterday, containing two significant clauses which will be of interest to feminists.

Firstly, Clause 13 (formerly Clause 14) of the Policing and Crime Bill was passed without amendment and now makes it a criminal offence to buy sexual services from someone who has been subjected to “force, deception or threats”. Hitherto, the only recourse for police was to try to charge a punter with rape, which relies on proving that he (or, I guess in theory, she) had reasonable cause to believe that consent was not freely given. As far as I’m aware there was no law against buying or selling sex, only in various activities inevitably associated with prostitution, such as keeping a brothel, streetwalking and trafficking. Clause 13 makes it a criminal offense even where the punter didn’t know that the prostitute was controlled for gain. I’m no lawyer, but at face value this seems sort of analagous to it being an offense to handle stolen goods even if you didn’t know … that is to say, it puts the onus on the person receiving the goods or, in this case, services to be sure of their provenance before buying them. It’s a clear shift of responsibilty towards the men buying sexual services (obviously I don’t mean to compare women who work as prostitutes to stolen objects such as TVs, I’m just trying to make an analogy…)

The other clause of interest, Clause 26 (formerly Clause 27), reclassifies lap dancing clubs so that they require licensing as sex establishments rather than as cafes and bars. This gives much more scope for local objections to the granting of licenses, and allow the police to shut down lap dancing clubs where they’re near ‘sensitive locations’ such as schools.

The Act also modifies existing offences such as kerb crawling and loitering.

There was a huge amount of work and pressure for this legislation from the feminist Demand Change! coalition, headed by Eaves and Object. Sasha Rakoff, Director of Object, said:

“These provisions in the Policing and Crime Bill mark a major victory in the fight against the dehumanisation of women in the sex industry. The mainstreaming and glamourisation of lap dancing and prostitution promote sexist stereotypes of women as objects, and not real people. It is a no brainer that purchasing a woman who has been exploited should be illegal, and that lap dancing clubs should be regulated as part of the sex industry and we are delighted that Parliament has prioritised the voices of those who have been exploited and who care about equality above the voices of profit and sexual entitlement. Today’s victory in Parliament shows that treating women like sexual objects is not inevitable or unstoppable and that it has no place in the twenty first century”