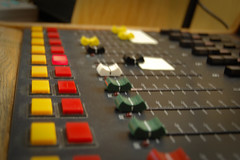 There have been a few radio ventures on the F-word front over the past week. You can catch Louise Livesey talking about last Friday’s Reclaim the Night in Oxford on BBC Radio Oxfordshire (2.04.15) and regular guest blogger Kate Smuthwaite discussing sex education with Stephen Nolan on his show on BBC Radio Five Live (1.54.29).

Along with this, I took part in two discussions on BBC Three Counties Radio last week. The first was on Jonathan Vernon Smith’s show and was about body hair, in the light of the Daily Mail’s vicious and gleeful criticism of model Danielle Bux for daring to go out with hair showing under her arms. (The topic begins from 2.01.32 and my contribution comes in at 2.43.35.) Jonathan quite rightly suggested that it didn’t matter whether or not Bux’s body hair was intentional or the result of her “forgetting to shave” and pointed out that, while it’s true that men are generally expected to shave their faces, people don’t tend to look at them and say “ugh!” the way many of them unfortunately do when talking about body hair on women. However, he also said he hadn’t heard from a male caller saying it was “disgusting” and brought up the apparent tendency for women to be the ones doing the disapproving during our discussion. I’m fairy sure there actually were some male callers making negative comments during the course of the show and, in any case, hairy women is sadly something I’ve seen women and men reacting badly to. Indeed, during a conversation before the show, Jonathan told me that Naomi Campbell had recently admitted to Jonathan Ross that she waxes her big toe, only for him to be taken aback that she even has it there in the first place!

The second discussion I got involved in was with Katherine Boyle and Tara Gungaphul on the Nine o’ Clock show. It was focused on the decision to replace Jerry Hall with the much younger Kelly Brook as the character “Celia” in a theatre production of Calendar Girls (0.04.40 and 1.05.30). Apart from naked calendars being extremely commonplace (i.e. banal rather than daring) at the moment and this not being helped by the rather obviously conventionally sexy slant being given by Brook, it also has to be said that the original plotline was about older women, so it seems decidedly suspect that a woman who is only just about to reach 30 should be in the cast. And that’s just one of the issues. We didn’t even get around to touching on a woman’s greatest asset apparently being her looks and that the need for older women to be included in that in order to feel “fabulous”, or whatever, is arguably flawed from the start…

Photo by vår resa, shared under a Creative Commons Licence.