Kate Moss: ‘Nothing tastes as good as skinny feels’ 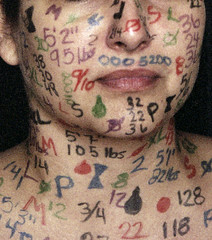 Kate Moss has been criticised this week for telling an interviewer that one of her mottoes is ‘Nothing tastes as good as skinny feels’. The Guardian reports today that the motto is popular on pro-anorexia websites.

While I agree that the motto itself is appalling, I think the focus placed on the effect Moss’s comment could have on young girls is little more than hypocritical media outrage. Our entire culture is saturated with fat hate and an obsession with dieting, calorie counting and weight loss. The idea that food is the enemy, rather than a source of nourishment and pleasure, is repeatedly pushed on women by the same media publications that are now attacking Kate Moss. Her struggles with food and body image mirror those of thousands of women, and whether or not teenage girls paid any attention to her comment, they will not be able to avoid the government’s anti-fat TV campaigns, or the adult women in their lives discussing how guilty they feel for eating a piece of chocolate cake, or the calorie labels on every damn food item, or the beautiful, healthy woman in the Special K ad studiously avoiding the biscuit jar so she can earn the right to have fun in a swimsuit, or Cosmo’s latest miracle diet, or Gok bloody Wan, or 10 Years Younger, or any other shitty piece of media production based on the almost universally accepted idea that women’s bodies exist to be looked at, to be disguised, diminished and displayed, rather than lived in and enjoyed as the tools that can allow us to experience so much.

Kate Moss is herself a victim of this fiercely misogynistic culture – even if she has learnt to play it to her own financial advantage – and when it comes to making girls feel so hopeless and worthless that they want to starve themselves into oblivion, her comment is but a drop in the ocean.

Image by Christi Nielsen, from her ‘I’m Just About to Get Skinny’ project.