This weekend around 2,000 women marched through central London to Reclaim the Night and demand an end to violence against women.

For me, it was a fantastic (if very damp) experience of being out on the streets with thousands of women chanting and singing, and making a stand against violence against women. And also to stand against the whole victim-blaming rape culture. This year was extra special because the march was led by the SheBoom drummers, helping to make the march heard even more than usual. (And also SheBoom will be leading Reclaim the Night Glasgow later this week.)

As I posted earlier, a woman was actually assaulted while on the march, unfortunately underlining exactly why it is that RTN is so crucial and how hard it really is to make the march a “safe and empowering event”.

At the training session for stewards a few weeks ago, we talked about how every woman coming to the march has a different perspective on it – while many women find it a joyful, affirming and empowering experience (as I did, even despite the rain!), others find it a sad experience as well, as it stirs up a lot of emotion. It’s such a shame that it couldn’t at least be an experience that was completely free from violence against women.

Sadly that wasn’t the only cloud cast on the march – you may have seen Laura’s post last week about whether or not RTN is really opening and welcoming to trans women, and if you were following the tweets, you’ll have seen it was a live issue on the night as well. (Hannah Nicklin also interviewed me on this at the rally afterwards, but I haven’t had a chance to listen back to it yet and I was feeling pretty soggy and exhausted, not at my best, by that time! With that previso, you can listen to that and all her audioboo interviews here.)

Given that it was the International Transgender Day of Remembrance only the day before the march, it was especially sad to see that the issue was not resolved, so that all women, cis and trans, felt totally comfortable and welcome taking part in a protest on an issue which concerns us all.

Some of photos from the march by Hannah Nicklin, from her Flickr stream: 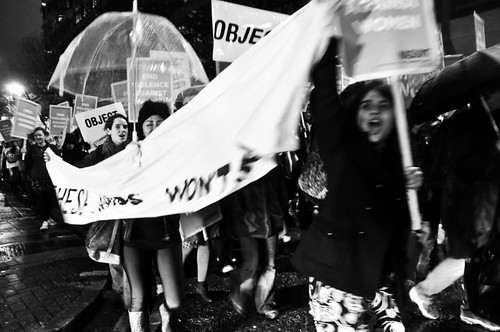 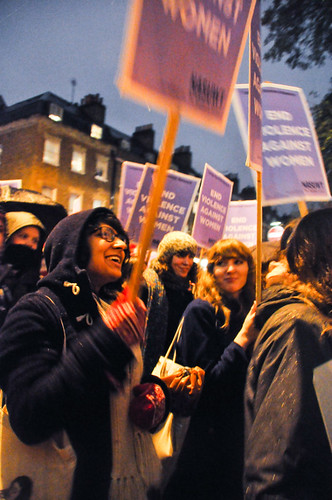 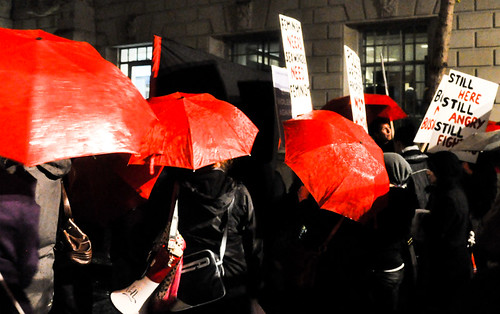 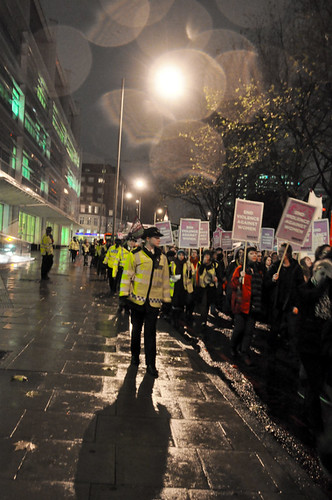 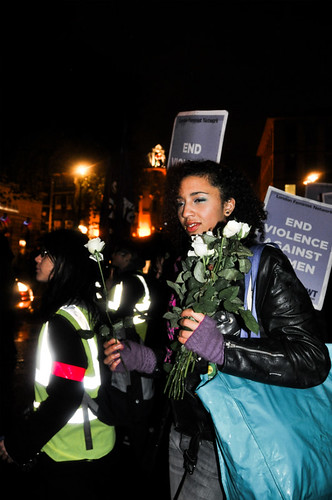 At the rally, we heard a series of fantastic speeches (some of them are available on the RTN website) and the Emma Humphreys Memorial Prize was given out. If you don’t know who Emma Humphreys was, Pratibha Parmar’s video about what happened to her and her legacy is really worth a watch:

Emma Humphrey – An Inspiring Legacy from Kali Films on Vimeo.

(I’m hoping we’ll be able to post a transcript soon, but the EHMP website has a section about her life as well, if you can’t watch the video).

Interviewer: Ok Emma, are you ready?

Voiceover: It was on a hot scorching day in 1995 that Emma Humphreys was set free after 10 years in prison. She was originally convicted at age 17 for the murder of her violent boyfriend Trevor Armitage. Emma was cleared on appeal, testing the legal grounds for provocation.

News reporter: It may have calmed down now but just hours ago the scenes here were ecstatic as Emma Humphreys, who spent her entire adult life in prison, walked free.

Emma: It was great, it was massive. Everybody fighting for me to get out of prison. But when they said I was free to go it was all a mad rush. I remember standing on the steps and receiving bouquets of flowers, getting shoved into a taxi and going to the press conference.

Emma at press conference: Just thanks to everybody that’s got me here and it was all for a reason and maybe it’s to help people who are abused.

Voiceover: In September 1992 Justice for Women, a feminist campaign group, received a letter from Emma after she had spent seven years in prison. In response to her plea Justice for Women organised a legal team to take on the criminal justice system to fight for Emma’s freedom.

Justice for women at press conference: Whilst we applaud the judges for their decision, we do not feel grateful that a simple act of justice has taken this long. Justice for Emma has come ten years too late. This case has been a miscarriage of justice on a par with that of the Guildford Four and Judith Ward.

Poem appears on screen and is read aloud: I’m 27 now

and when my physical self is free

from these bars and walls

I shall live childishly and adolescently wildly

Emma: I find it strange how I was abusing myself at the age of seven. I was picking chunks of skin out of my hands. I used to have to go to school and ?? hands so I wouldn’t do it. [I cannot make out a couple of Emma’s words at this point]

Interviewer: You don’t know if you were sexually abused when you were little?

Emma: No I don’t know. I spent every weekend with my father and I don’t remember one weekend.

Poem appears on screen and is read aloud: I live in my own world

who do not understand

that is inside of myself

so unknown by Emma

we, it or Emma, or myself

who? I don’t know

is very scared to wake up

Voiceover: Emma’s parents separated when the children were very little. Soon after her mother met Alan Summerville while working at a pub. They made plans to start a new life in Canada, bringing the children with them.

Emma: My mum changed, she became worse alcoholic. Alan was a chronic alcoholic. There was always fights and police coming around and. He seemed really nice at first. He used to spoil us all. He flew out to Canada before us, and then he sent for us to come over to Canada. After about two days he split her head, head open. He knocked my head against hers. They were both drunk. There was a lot of violence, I hated it. But I’ll always have something for him. He was beaten as a child. So I try to understand why he was violent.

Poem appears on screen and is read aloud: I am scared

to find some more

that holds the pain

be it my heart,

and let me loose

from my own world.

Emma: I asked to be removed from home; I couldn’t stand it any longer. I was in many kid’s homes, children’s centres. There was about 500 kids. I lived with a Mormon family.

Emma: I ran away from home when I was 12, and the only way I could guaranteed to get a roof over my head was to sleep with a man. Then I met this other girl and we started doing it for money. Could be a judge, could be a mechanic, could be an unemployed bloke. There was abuse, rape, muggings. You name it, it happened to me. I don’t care what anybody says, there’s no happy hooker. Three quarters of the women that work the streets are out there not just ‘cos they want to be out there, because they’re made to be there. Like a piece of meat, that they’re there to be bought and sold and…

Letter appears on screen and is read aloud: Dear Justice for Women, I hope you don’t mind me writing to you. I’ll try to keep this brief because you’re probably very busy. In December ‘85 I was convicted of murdering my boyfriend Trevor Armitage who was 35. I had met him six months previously when I was sixteen. I was a prostitute and he was a client. I was seventeen at the time of the offence and am 24 now. The night of the offence I had a knife in my hand from cutting my wrists, because I wanted some kind of response from him other than physical abuse or rape again. As I heard him coming I panicked that maybe he could actually turn even worse and turn the knife on me and I was cornered upstairs. He came and laid beside where I was sitting. He was undressed, and I knew I was going to be raped again, beaten or both. I couldn’t go through it again. I just wanted him to get away from me.

Emma: I know I killed somebody and I know it was one of the worse things you could ever do. I knew that once he took his clothes off it wasn’t just going to be a straightforward knockaround the house. I just couldn’t, I just couldn’t go through with it anymore, I couldn’t. And I don’t know what made me do, do it.

News Reporter: For stabbing him to death she was ordered at 17 to be detained at her majesty’s pleasure. She’s been in prison for 10 years, her entire adult life.

Poem appears on screen and is read aloud: Freedom

What does it mean?

It means to get up in the morning and not to be afraid, like I was as a child,

like I am in my confinement, what will hit me today?

I hope to wake up without anxiety, wake up slowly or fast whatever the day feels like.

Emma: I’ve had to resettle into a community that I don’t know. I’m used to kid’s homes or prisons; I’m not used to being out here on my own.

Voiceover: While in prison Emma developed a love for writing, finding solace and expression through her work and won a Cursor award for literature.

Emma: I said I want to keep on writing and work with children. Those are still two things I would like to do.

Poem appears on screen and is read aloud: To slip over the edge

over the edges of this paper

if you want to know

where my sanity lies

of this paper you are

Interviewer: Have there been any good times since you’ve been out?

Emma: Yeah there has.

Emma: Ohhhh, I don’t know. (shakes head) Like today, going on a picnic in the heat.

Emma: All I can remember is, she’s to be set free immediately, I still don’t feel free in my mind.

Interviewer: Do you not, no?

Voiceover: Emma Humphreys died on the 11th July 1998 aged just 30. Her death was caused by an accidental overdose of the medication she had become addicted to whilst in prison.

Following her untimely death in 1998, friends set up the Emma Humphreys Memorial Prize in order to remember her brave spirit and allow her legacy to continue to benefit other women in similar situations. The prize recognises the many different forms that violence against women and children can take. There are many inspiring and creative ways in which women have sought to challenge that violence. In its 10 year history prizes have been awarded to individuals and groups working around issues such as child abuse, domestic violence, rape, female genital mutilation, the use of immigration laws or organised religions to control women’s access to basic rights, women’s imprisonment, pornography and prostitution.

Emma: It was all for a reason, and maybe it’s to help people who are abused.

[Note: With the exception of ‘Freedom’, I do not know how Emma’s poems are presented so they are written here as they are on the screen. Two words differed when spoken to those on the screen so I chose to type the spoken word.) 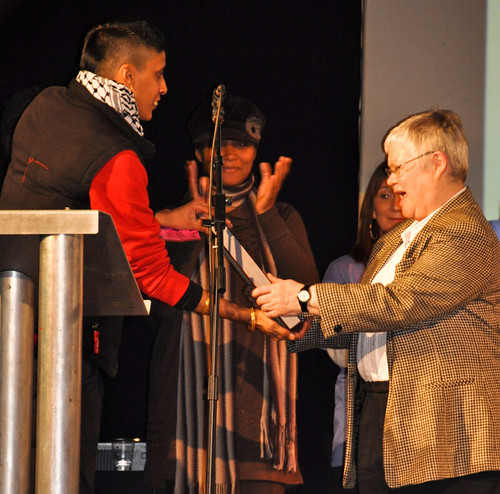