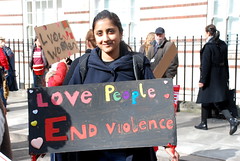 2009 is not yet finished, but already we’ve got details for next year’s Million Women Rise. Put in your diaries, the London march will take place 6 March 2010. Also please start emailing us the dates of any other actions or events for our calendar!

Can the BBC be trusted with a web page? asks Refusing the default, after the BBC’s Have Your Say asked its readers the question “Should homosexuals face execution?” (since rephrased then retracted).

As the UN climate talks continue in Copenhagen, efforts are underway to get a gendered perspective included in whatever treaty or agreement is signed there. Sara Ahmed puts the points across again about how important it is that the agreement brings gender justice. However, so far the outlook is not good.

Gender CC has been naming “gender champions” to recognise the efforts some negotiators have made towards taking gender into account, so far recognising Ghana, Finland and Iceland. Yarlswood has been in the news again because of reports of children being sent there. Sokari posts about the situation particularly for children and mothers, over at Black Looks. She also links up this petition calling for:

1. Everyone who wins the right to stay in the UK, no matter under which law or convention, must have the unconditional right to family reunion.

2. Children should have the right to join their mother or father even if they turned 18 before their parents’ asylum claim was settled.

The Telegraph’s victim-blaming reporting on links between alcohol and rape, which totally twisted the results of the research it was meant to be reporting, has won the Best Science Reporting Prize for Error-regretting, says Feminist Philosophers.

stroppyblog posts on the news Peter Tatchell has had to step down as Green party candidate because of brain damage. Melissa at Shakesville takes on a ridiculous story in the Telegraph, which worries: “An overwhelming 96 per cent of women said they regretted having thrown away a pair of shoes, while only 15 per cent felt sorry at dumping a boyfriend.” Melissa says:

What I love about it is how it’s designed to convey to the casual reader, coming on the heels (pun intended) of the information that women remember their first pair of shoes more readily than their first kiss, that women are callous bitchez who care more about old shoes than old beaus. (Note the heterocentrism, btw.) But of course most people don’t have regret at dumping exes. They’re exes for a reason, after all.

A 12 year old pupil in the US was allegedly raped in the stairway of her school – Jezebel reports on the upsetting and victim blaming comments made by school staff.

Also in the US, What Tami Says posts about a young black girl whose teacher cut off one of her braids. Tami looks at some of the comments left on local media reports about this story, and notes:

reading the comments above made me think of Scrooge’s retort when asked to help the poor during the holiday season. He didn’t see the value. And some folks clearly don’t see the value in nurturing children like Lamya–of cherishing them, treating them like they matter, like they have a future. Some children we treat as innocent blessings. Others, like criminals.

Birds Eye View are calling for applicants for She Writes, a series of training programme for emerging women screenwriters.

To me, it feels like Meggy renders visible the historical absence of Asians and Asian Americans in American popular culture as fashionable bodies -and through fashion as contemporaneous bodies- and also corrects this absence in creating another archive through which we might imagine otherwise.

Geek Feminism Blog points to an opportunity to nominate recent science fiction and fantasy for awards, particularly if these works: ““assert one’s right to be in the world, even if one is not One Standard Unit Straight White Man”.

Sociological Images points to some interesting and worrying research around the impact of viewing stereotypical images:

even if there were a diversity of photographs, if any of those photographs confirmed pre-existing stereotypes, learning was undermined. 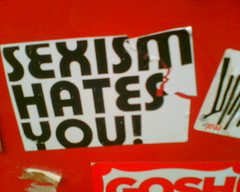 Finally, Dumi Lewis guest posts at Racialicious on being feminism and being an ally:

I tend to prefer to be known as an ally when working against oppression but still oppressing. To me, being an ally is about much more than advocacy on behalf of a group or interests that may not, on their face, appear to be your own. Being an ally is about a commitment to social justice grounded in an understanding of one’s self.

First photo by me, shared on Flickr, second photo of protest at Copenhagen, shows four women holding “no climate justice without gender justice” banner and red umbrellas, third photo of woman holding a sign shaped like the ‘women symbol’, with the Earth painted in the centre, and “reparations for climate debt, justice for women” written on it”, shared by Oxfam International under a Creative Commons license, fourth photo by rrho, also shared under Creative Commons