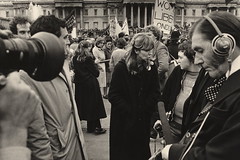 A Woman’s Place is a short documentary about the UK women’s liberation movement in the early 1970s. According to Journeyman Pictures:

It’s the 28th of February 1970 and women’s groups from around the country have assembled at Ruskin College, Oxford, for the first ever National Women’s Liberation Conference. A powerful, exuberant insight into the beginning of the Women’s Liberation Movement.

Here at the Oxford University Union, women speak openly about their differing lives and aspirations. Some speak of increasing a father’s role in childcare and of improving child’s rights- ‘’in women’s liberation we are calling for the liberation of our children’ says one woman. Whilst others want to be acknowledged as women despite not wanting children- ‘must we regard women like myself, who have no desire to have a child, as freaks?’ The atmosphere is one of excitement and solidarity: a cacophony of slogan-painting and passionate debates. At the end of it all, the movement has four basic demands: Equal pay, equal education and job opportunities, free contraception and abortion on demand and free 24hr nurseries.

‘Keep Young and beautiful! It’s your duty to be beautiful’ is the ironic cry of the 4000 strong crowd of women singing and dancing their way through Oxford street, London in 1971. It’s the First International Women’s Day march and the movement’s four demands, emblazoned on banners, will soon be handed to the prime minister in a written petition. ‘I’m amazed by the amount of people here’ says one elderly man ‘I think it’s great’. Whilst some women of a different generation view the march as an embarrassment – ‘do I think women are equal? Yes and no’ says one. The march gains widespread newspaper and television coverage, giving profile to the movement and a voice for its demands. It sparked off a series of laws giving equality to women and was seen by many as a landmark event. ‘I think it’s the beginning of the process of liberating everyone’ said one man at the time ‘the conflict isn’t really between men and women, men are pretty repressed too’. A powerful, exuberant insight into the beginning of the Women’s Liberation Movement, featuring notable feminists Audrey Battersby, Midge Mackenzie, Judith Brandt, Liz Danciger, Sally Fraser, Lyn Gambles, Esther Ronay, Kay Osborn, Michelene Victor and Sheila Allen.

Embedding has been turned off, but you can watch the 26 minute documentary on YouTube. There is a descriptive transcript on Journeyman Pictures’ website.

Photo by tonyhall, shared on Flickr under a Creative Commons license – it shows a camera crew filming a women’s liberation protest from 1979 in London, so somewhat after the events in the film