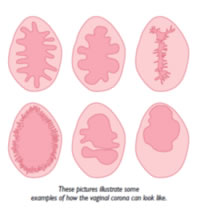 The hymen has been re-named the “vaginal corona”, in a bid to dispell some of the mythology and misinformation about it, via Jezebel.

The Swedish Association for Sexuality Education has produced an information booklet on the vaginal corona (or, slidkrans in Swedish) in Arabic, English and Sorani.

The new term for the hymen in Arabic is تاج{اكليل}المهبل،,

The new term in English is vaginal corona.

Every woman’s corona looks different – just like ear lobes, noses and labia – and differs in size, colour and shape… It is slightly pink, almost transparent, but if it’s thicker it may look a little paler or whitish. It may resemble the petals of a rose or other flower, it may be carnation-shaped, or it may look like a jigsaw piece or half-moon.

The myths surrounding the hymen were created to control women’s freedom and sexuality. The only way to counteract this is by disseminating knowledge.

Absolutely agree, and it all tied into the outdated concept of ‘virginity’.

From the press release:

The booklet describes what the female genitals look like and what the vaginal corona actually is. It also dispels many of the myths surrounding female sexuality and the misconceptions concerning the hymen and virginity. Etymologically, the term hymen comes from the Greek word for membrane. In Swedish, the hymen used to be called mödomshinna, which translates literally as “virginity membrane.” In fact, there is no brittle membrane, but rather multiple folds of mucous membrane. A vaginal corona, in other words.

“The vaginal corona is a permanent part of a woman’s body throughout her life. It doesn’t disappear after she first has sexual intercourse, and most women don’t bleed the first time,” said Ms Regnér.