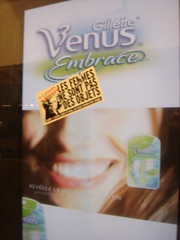 The use of Ms as an honorific free of implications about women’s marital status is pretty well established. But Francophone women don’t have an equivalent.

Over at Comment is Free today, Jessica Reed looks at the options, and concludes there’s little prospect of a new honorific entering the language – but considers the use of Madame to apply to all women.

Having lived in London since my early 20s, I had never not referred to myself as mademoiselle – a habit I never thought to question. And so I asked her: why was she using the term when in her mid-20s and unmarried? She was so young! Surely mademoiselle was a better choice, when madame was usually reserved for women in their 30s and beyond? Aurélie rolled her eyes, unimpressed with my remark. “It might be easy for you, with your choice of Miss, Mrs and Ms over the Channel. Here, referring to myself as madame immediately commands more respect, especially in my place of work and even more so when I introduce myself on the phone. People take me seriously, which isn’t always the case when I use mademoiselle. Madame it is for me, thank you very much!”

I forgot about our conversation until last week, when I received a request by a French person who began her email with “chère mademoiselle”. I found myself surprisingly displeased with the form of address, as madame must be used when the sender does not know whether the addressed woman is married or not (this person had no way to tell whether I was someone’s wife, but did know I am young). I said it out loud, pondering its meaning. The honorific, etymologically related to “damsel”, certainly has a medieval ring to it. There is definitely something belittling about the term, as it originally implied the woman was a virgin and not yet the symbolic property of her husband, as madame implies. No wonder such a patriatchal legacy makes French women feel patronised.

Photo by nova.zembla, shared on Flickr under a Creative Commons licence. Shows an advert in Paris for Gillette’s Venus razors, which has been stickered by feminists, click through to Flickr for translation