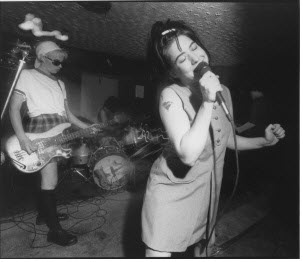 Bikini Kill are collecting stories for their archive. The former riot grrrls ask:

Please add your Bikini Kill story to this blog! It can be totally off the top of your head and doesn’t need to be fancy. Maybe it’s your reaction to a song we wrote, something weird that happened at one of our shows, a personal anecdote or just WHATEVER. Feel free to send images too!

Last month I wrote briefly about Staying, an art project by 12 lesbian asylum seekers and refugees, with artist Oreet Ashery. There’s going to be a reading from the project at the Poetry Society in London on 12 February, as part of LGBT history month. Via womensgrid which has full details:

Jerusalem-born British artist Ashery has collaborated with lesbian asylum seekers, developing characters, stories, drawings, and poems from their experiences of suffering traumatising discrimination, because of their sexual orientation, in their home countries.

These have been brought together in a publication available for download at http://www.artangel.org.uk

Please join us for readings from the publication and a discussion of the project.

The female gothic, which Jane Austen is poking fun at in this novel (but obviously loved too), provided a space for women to express and explore very real anxieties about patriarchy.

Why are there so few female werewolves? Student Elizabeth M. Clark has written what sounds like a very interesting thesis about this, and although I can’t download it for some reason, Latoya Peterson summarises at Jezebel.

This interview segment illustrates how the idea of a female werewolf

challenges cultural conceptions about the appropriate female body and acceptable

female behavior. For a horror film to show images of large, muscular, hairy, aggressive women would just be too “horrifying,” according to Wiseman and Beckinsale.

In order to neutralize the jarring effect that seeing “masculinized” women would have on the viewers’ delicate psyches, many directors employ a common device to keep audiences connected – physical beauty conveyed through excessive nude scenes. In exploring the scenes in Buffy the Vampire Slayer and Angel, Clark notes how both of the episodes emphasized the were-woman’s human form, and often featured long lingering shots of the women’s hairless, slender, nude bodies or images of the women behaving in sexually aggressive ways while still in human form.

Via Samhita at Feministing, The Frisky has a series of photos and stories about black women artists, including writer Zora Neale Hurston – it’s black history month in the US right now.

In The Bloody Chamber, Angela Carter famously retold and repurposed fairy tales, and many feminist reclamations of the genre (if fairy tales can be called a genre!) have followed. Jezebel found another project in this vein, which is calling for submissions of

Stories that radically revise stereotypes of “bad women” in the Bible, in myth and in fairy-tales. Stories that aren’t afraid to be literary, transgressive, dark, and sexy. Think: Lilith, Medea, the Wicked Stepmother, the Evil Witch, Pandora, Eve, crones, sibyls, fates, muses. Contemporary adaptations are fine… The spine: We begin to see these women through another lens.

Over at Racialicious, guest blogger A. Rahman Ford writes a powerful piece about masculinity, race and disability, explaining his photographic self-portrait:

The photo, titled “undesirable,” is essentially about me ultimately beginning the journey of accepting my disability as I have my blackness. More broadly, it is to protest what I refer to as the negative fetishism of poor bodies, bodies that are deemed broke and broken, crooked and criminal, dilapidated and degenerate, ugly and useless. It was influenced in part by depictions of Holocaust victims – persons with disabilities among them – determined by the Nazi regime to be “undesirable” and anathema to the Aryan archetype because they did not and could not conform. “Undesirable” is also meant to invoke sexuality and how poor male bodies navigate the difficulty of being sexually desirable because of the physical valuation males and females deploy to determine sexual attraction. These are issues and feelings that I have dealt with and I used the photo to embody both my struggle and progress.

Heather Corinna from Scarlateen unpacks a very common phrase used in sex ed for teenagers: “You should wait for sex, but if you can’t….” She says instead:

What we want is for everyone to only have any kind of sex — be it intercourse or any other physically enacted expression of sexuality with oneself or a partner — when it is what everyone involved in a sexual scenario: strongly wants, can and does actively consent to, feels prepared for, and has the knowledge and capacity to have sex in a way that is physically and emotionally safe for everyone.

This is our goal for people of every age, and we don’t think it’s fair or reasonable to hold young people to different standards on this than we hold, or anyone else holds, older people (especially if you’re going to say young people are less capable of meeting the standard than older people, but older people don’t need to meet it once they are capable).