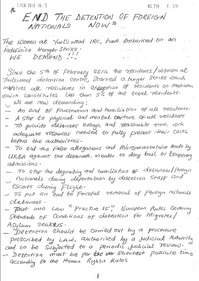 The shocking situation for women at the Yarl’s Wood detention centre continues. More than 50 women are on hunger strike, and today the Black Women’s Rape Action Project sent out this report that some women have been beaten, and some subject to racist abuse and more:

Over fifty women are currently trapped in an airless hallway in Yarl’s Immigration Removal Centre. On Friday 5 February they began a hunger strike. Today they were herded into the hallway were they have been left there for over two hours without access to water or toilets. Four women, including an asthma sufferer, have fainted. Around 1.30 the guards came into the hallway and started to beat women. As we spoke to one woman she told us that someone was bleeding. One of the managers told the women they would regret what they have done; she called the Chinese women monkeys, and the Black women black monkeys. Four other women have been locked in other rooms for three hours, and have been told by room mates that their belongings have been packed. They are worried they face immediate removal even though their cases are still being considered. Fifteen women have been locked up in “Kingfisher”, the punishment wing.

According to women on the other wings all movement has been restricted – even those not on the hunger strike are not getting any food including diabetics who urgently need it.

Hunger strikers want to speak to the press and get the truth out about the protest.

They are protesting at the length of time they have been detained – one woman who cannot speak English, has been held for over two years. Their statement is attached. Their demands include: an end to the “degradation and humiliation of detained/foreign nationals during deportation by detention staff and escorts during flights”; an end to the Fast Track for asylum seekers which denies fair decisions, the restoration of full legal aid and access to independent legal advice for everyone who is being detained.

Cristel Amiss, Black Women’s Rape Action Project which is supporting women on hunger strike said “Over 70% of women in Yarl’s Wood are rape survivors, many are sick and vulnerable. Why are they being punished for raising serious injustices? This “kettling” tactic has been thoroughly discredited, women should be allowed back into their rooms immediately, there should be an immediate investigation into what has happened and any guard found to be responsible for injuring women must be sacked immediately”.

More information about the conditions in Yarl’s Wood reported by women recently released who spoke at the House of Commons 14 January 2010.

Click on the images below to see a full-size version and read the full list of demands: 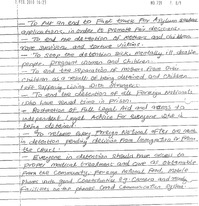