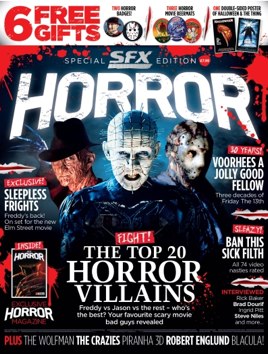 Jenni Hill works as a junior editor at science fiction, fantasy and horror publishers Solaris Books, where she very nearly has everyone using the Bechdel test. Very nearly.

Author and poet Maura McHugh, who blogs under the name Splinister, has pointed out a case of, perhaps unconscious, sexism perpetrated by the all-male editorial team at SFX, a popular monthly magazine which caters to fans of science fiction, fantasy and horror.

Maura points out the lack of ‘alone time’ given to women in other articles in the piece, saying that actress Ingrid Pitt is the only woman with any time in the spotlight – half a page in a ‘My Life In Horror’ section.

Maura told me: “I really do not enjoy bringing up this matter. Equally, someone has to say something. I’m not being over-dramatic, or asking for anything outrageous. What I want is that women get a fair representation.”

Presumably, SFX will issue some sort of apology, as the story has now been picked up by The Guardian and Maura is in contact with the editors. One might think, however, that the industry should have learned its lesson five months ago, when the British Fantasy Society had to issue an apology for their anthology In Conversation: A Writer’s Perspective, Volume One: Horror, which interviewed solely male writers in the genre.

The most ironic thing about all this, is that it has happened during the ‘Women in Horror’ month, an event created because female creators in this genre get so little recognition.