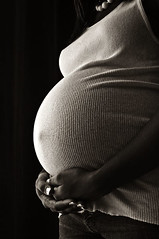 I found feminism when it came shooting out of my uterus.

I’d been ‘equality-minded’ before that, certainly, but the harsh, cold reality of deeply-ingrained and omnipresent sexism didn’t hit me full in the face until I became a mother. Having a baby changed my life in a practical sense in that my lifestyle was drastically altered, but it also altered my view of the world and gave me a new understanding of just how conscripted my role in it was. None of the pregnancy or parenting books had prepared me for that. The antipathy I’d felt towards ‘badly behaved’ children in public, all of the judgement and scorn I’d heaped on mothers I felt weren’t ‘doing it right’, my grand proclamations that I would do things a certain way and that my kids would be different…well, let’s just say that hindsight is an incredibly humbling (and embarrassing) thing. The rose tinted glasses came off and what I saw and experienced shocked me.

I couldn’t get a part-time job that would pay the bills and full-time work was out of the question with the astronomical cost of childcare compared to my salary level. I was suddenly thrown into the role of stay-at-home mum, a ‘luxury’ that I was meant to be thrilled with but which felt more like a mandate than a choice. That’s not to say I wasn’t very privileged because I was (and am), but it made me realise that if I wasn’t happy with the lack of choices available to me, how few did women of lesser socio-economic status have? I came to realise that class is inexorably and completely woven into and around mothering, constricting it to fit a certain mould of societal expectation, often to the detriment of individuals and their families.

My growing involvement with feminist activism and interest in mothering as an important intersection of that ideology has lit a fire in my belly for revolution, but a feeling of exclusion from the ‘mainstream’ ranks of feminism is sometimes strong. Many mothers I have spoken to (both self-proclaimed feminists and otherwise) feel the same way. When an entire conference on reproductive rights doesn’t include a single workshop on birth; when stay-at-home mothers are denigrated for wasting their skills and educations; when so many resources are directed towards fighting strip clubs and lads’ mags but so little towards child poverty; when public spaces and services are made inaccessible and unwelcoming to families; when feminist books devote many more pages to the evils of pornography than the fact that mothers are disproportionately the ones suffering the monumental and adverse effects of the gender pay gap…it’s enough to make many mothers feel they’ve been forgotten by feminism, that their struggles are unimportant or inevitable.

To help give parents a place to discuss feminist issues important to them and strategise our role in the women’s rights movement, I’ve started a new website called Fertile Feminism. Its goal is to not only give voice and venue to discourse among parents, but non-parents as well. Without open and honest dialogue between us, divides (whether real or imagined) will continue to dominate at a time when feminism needs, more than ever, some cohesion. Imagine what it would mean to our movement if thousands and millions of mothers, many of whom hold feminist principles, were engaged with and included in a real, meaningful way; where meetings and marches are not always held at our children’s bedtimes or in places where our pushchairs won’t fit, our children can’t play and there’s nowhere to change a nappy. I’ve noticed a recent improvement in considering these things in some groups and organisations and applaud their efforts, but there’s plenty of room for improvement. Parents can be activists too, but only if our caretaking responsibilities are being met concurrently. Could helping mothers be proud to use ‘the f word’ be the key to riding the third wave, our wave, to the crest of something meaningful, something that our granddaughters will read about in their history books? I think it just might be.

I hope you’ll visit Fertile Feminism and join the discussion.