Hollywood glass ceiling is shattered, but women are still losing out in film and TV 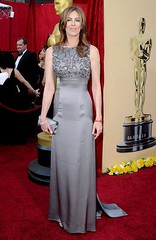 On the eve of International Women’s Day, Kathryn Bigelow became the first woman to win an Oscar for Best Director, for her Iraq war drama The Hurt Locker. She is one of only five women to have even been nominated for this prestigious award, and last night she fought off competition from James Cameron’s epic Avatar, among others, to win six Oscars for her film. A glass ceiling has undoubtedly been shattered here, and about time too.

As Melissa Silverstein at Women & Hollywood put it:

“I never really thought this was possible even six months ago since the gender problem in Hollywood is so pervasive, but DAMN, it happened – a woman won for BEST DIRECTOR. Director is the ultimate leader in Hollywood, the big kahuna, and now, finally a woman is in the club and that my friends, is a big deal.”

To put Bigelow’s win in context, the Oscars have been running for 82 years; it took over eight decades for the representation of women in this illustrious category to leap from 0% to 1.2% (and it hardly needs pointing out that the representation of non-white, LGBTQI or disabled women still stands at 0%). That figure surely shows that however much it may be cause for celebration, Bigelow’s win also serves to remind us that Hollywood is still overwhelmingly dominated by white, straight, cis, able-bodied males.

“Although successful female directors appear to have gained higher profiles of late, the actual percentage of top films directed by women has remained static for 25 years at 7% to 9%… For instance, neither Warner Bros., the world’s largest studio, nor Paramount Pictures hired a single female director last year, while Walt Disney Studios and Universal Studios hired just one apiece. No woman has ever been hired to direct an event picture with a budget of more than $100 million, the kind of film most valued by the Hollywood machine.”

Furthermore, the situation for actors is also unequal, if not nearly as dire. She writes that female actors held “only 29.9% of the 4,379 speaking parts in the 100 top-grossing films of 2007.”

This figure is startlingly similar to one found by a study into British television, reported in The Guardian yesterday, which discovered that inequality is also rife on the small screen. Women were found to hold only a third of all broadcast roles overall (this includes actors, presenters and news anchors); the only area where they were close to being equally represented was in soap acting, whereas they made up only 31% of news broadcasters. Perhaps most depressing was this finding:

“When women do feature in news programmes, 69% of the time it’s to discuss “softer” news topics, such as health, culture or cookery.”

Or, actually, maybe it’s this one:

“When it comes to general vox pops, women are canvassed for their opinion only a third as frequently as men.”

If sexism exists in programme-making at this very basic level – which of the general public’s opinions deserve to be broadcast – what does that say about decisions being made higher up, such as who would make the best presenter, producer or director? This idea that men are more interesting, and have more to say about a wider variety of issues (especially serious and important ones), is surely at the root of the gender divide we are seeing, not just on ground level but also at the top of the tree – that very same tree that made one of its branches available to women for the first time last night?

I’m glad a piece of research has finally backed up the silent rage I feel whenever I flick on the telly and see yet another male comedy panel show with the occasional token woman. It’s not enough to study the phenomenon though; there needs to be something done about it. In an IWD spirit of optimism though, I hope that both this study and Bigelow’s victory give a strong message to women in film and television today – the situation may be crap, but change is possible.