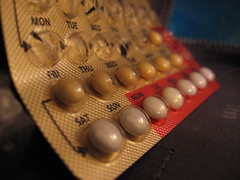 Amy Clare mentioned the recent case of a Sheffield woman who was refused the contraceptive pill by a religious pharmacist and told to come back the next day when a different pharmacist would be working. Sadly, the new industry regulator, the General Pharmaceutical Council, have said that they will not be removing the ‘conscience clause’ that allows pharmacists to do this from the new code of practice. The pharmacists in question may have to direct customers to a different pharmacist, but that’s it. Their personal beliefs are apparently more important that the customer’s right to healthcare.

This just sickens me. An individual is free to believe what they want, and to apply those beliefs to their own personal choices, but they do not have the right to use their belief to curtail the rights and freedom of others.

The couple of times I’ve had to get the morning after pill has been on a Sunday, when my local GP surgery wasn’t open. Naturally, I’ve wanted to get it as soon as possible, not potentially wait for hours at an NHS walk-in centre, so I’ve gone to a pharmacy and forked out for it (asking the guy to pay his share, which I think is only right. And, yes, I’ve been lucky that I could afford it.) There’s generally a limited range of pharmacies open on a Sunday, and if I had been faced with one of these selfish bigots I may not have had anywhere else to go. I certainly couldn’t have waited for a less selfish pharmacist to come in to work the following day. Getting emergency and regular contraception can be stressful enough, without finding yourself pitted against a pharmacist whose beliefs compromise their ability to do their job.

If you’re not happy to dispense drugs that are legally available in this country, don’t become a pharmacist. It should be a breach of professional conduct to refuse to do so, not a bloody perk of the job.

The GPhC’s consultation on ethics and codes of practice has closed (presumably this announcement is the result of that consultation), but you can feedback here. The BBC says there may be wider consultation on this issue later in the year.

Image by Beppie K, shared under a Creative Commons Licence.