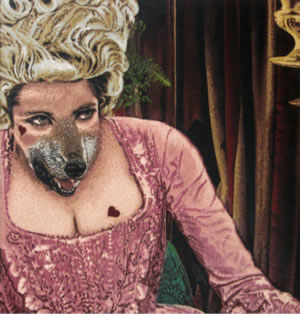 Hannah Priest is holding a conference about female werewolves

In September 2010, a colleague and I will be hosting a conference at the University of Manchester on female werewolves in art, literature, folklore and film. While this might seem like a remarkably specialised subject, the response we’ve had so far has been overwhelming. It seems like 2010 is going to be the year of the she-wolf.

My own interest in female werewolves – and the original idea for the conference – came about almost by accident. I wrote my PhD thesis on monsters in medieval literature and two of my central texts featured male werewolves. As I was looking at the ways in which monsters are gendered, I put a neat little footnote to the effect that werewolves are usually male, though there are sometimes exceptions. I think I originally mentioned the film Ginger Snaps and Buffy the Vampire Slayer as examples of notable female werewolves. Not long after that, a friend mentioned that there is a female werewolf in Terry Pratchett’s Discworld series. Then someone else recommended I read Suzy McKee Charnas’s short story ‘Boobs’. I watched The Curse, Cursed and An American Werewolf in Paris; I found an entire anthology of female werewolf stories published by Cleis Press; I saw work by Australian visual artists that does amazing things with the motif of the female werewolf. Everywhere I looked, I found more examples of fascinating and disturbing she-wolves, and I realized that a footnote was not going to be enough to do them justice. Around the time my own ideas were starting to develop, I was introduced to Carys Crossen, a PhD student at Manchester. Carys is currently writing her thesis on post-1800 werewolves, with a focus on gender and sexuality. We pooled our knowledge, and the conference began to come to life.

Carys and I are not the only researchers working on werewolves. As we’ve been marketing the conference, I’ve been struck by the growing interest in this subject. Female werewolves are a hot topic in current scholarship and a number of recent PhD theses and articles have grappled with the problem of what exactly a female werewolf is or why there are fewer she-wolves than he-wolves. But these questions are not just the preserve of the academic community. In 2010, a number of new books and TV shows will feature female werewolves in some form or another – including (and I still don’t know if this is a joke) a Sex and the City-style show about four werewolves, produced by the Fox Network. It’s pretty difficult not to conclude that werewolves are indeed the new vampires.

But is there a reason why werewolves are usually male? I’m afraid I don’t have an absolute answer to that. Some of the speakers at the Manchester conference will be putting forward their own views on this tricky question, and drawing on folklore, mythology, psychoanalysis and historical evidence to shed some light on it. But the incredible response we’ve had to our call for submissions, from people working in diverse areas – from witchcraft trials to self-help books, from visual art to Scottish folk tales – makes me wonder if there even is a definitive answer. All I know for sure is that female werewolves continue to have a strong hold on the imagination. They’re alluring, certainly, but also challenging and threatening. And they definitely don’t belong in a footnote.

The She-Wolf conference will be held at the University of Manchester, 9-10 September 2010. The submission deadline is 31 March 2010. For more information, contact Dr. Hannah Priest at [email protected]

Linocut by Jazmina Cininas, ‘Angela prefers the company of wolves’, used with permission