Mathilde Madden is an author and journalist who writes about sex, sexuality, feminism and popular culture. She was also co-editor of Erotica Cover Watch (NSFW). 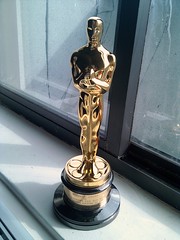 Women, know your limits! Fancy winning an Oscar? Sure, it might have been your dream since you were a little girl, you might have practised your speech in the bathroom mirror with a shampoo bottle a la Kate Winslet, but be careful what you wish for, because the break up of the Winslet-Mendes union, and the current rumours about Sandra Bullock, prove – yes prove – that if you win an Oscar for best actress you are condemning yourself to romantic misery.

Oh, except, aren’t Sandra Bullock’s current troubles due to a rumour about an affair that happened last year, when she won her Oscar just last week? So, what, curse fans, he guessed that she was going to bag the statuette (read: castration device) and did whatever it turns out he actually did, in advance? How strangely, um, prescient! And how come no one mentions the fact that last year’s best actor winner, Sean Penn, also headed for splitsville not long after? Or the fact that Oscar-bait Meryl Streep has been married to the same man since 1978? Or that Hollywood’s most loveless ever woman – Jennifer Aniston – has never even been nominated? Or the fact that Charlize Theron’s relationship breakdown didn’t happen until 6 years after her win? Reminds me of the line in the Tooth and Claw episode of Doctor Who where Queen Victoria proclaims of the Koh-i-Noor, “It is said that anyone who owns it will surely die!” And The Doctor tosses back, “Well that’s true of anything if you wait long enough.”

‘Cause everyone knows that Hollywood romances are notoriously fleeting. Add to that mix the fact that, this century, the average best actress winner has been nearly a decade younger than the average best actor recipient, and thus probably in a more transient relationship to begin with, and this looks more like a case of people seeing what they want to see. Seeing that no man would want to be with a successful woman? That women should stop trying to ‘have it all’?

Isn’t the Oscar curse yet another way of telling women that too much success (i.e. being more successful than your man) is unladylike? And of course the punishment for being unladylike is losing you man. Oh noes!

Image by Ho0n, shared under a Creative Commons license.