UN secretary general Ban Ki-moon has announced a key panel of 19 people, expected to mobilise $100 billion a year until 2020 to support the poorest nations affected by climate change. The panel is entirely made up of men.

GenderCC, a group of women working across the spectrum on climate change, from NGOs to business, today called for the situation to be addressed. They said:

While we are aware that the appointment of women does neither necessarily translate into women’s empowerment nor gender equality, we need to ask: Has the world run out of women experts? Is the planet consisting of men alone? Is it not for such imbalances that this climate crisis exists?

As Elizabeth Becker and Suzanne Ehlers pointed out over at Grist on Monday, this is especially ironic (not to say hypocritical), as Ban Ki-moon has called for more involvement of women in the UN negotiations to create a global treaty to tackle climate change – and has repeatedly highlighted how gender inequality puts women in a particularly vulnerable position regarding climate change.

The secretary-general himself has noted the need to include women in all aspects of decision-making on climate change. In a speech last September, he called on member states “to foster an environment where women are key decision makers on climate change, and play an equally central role in carrying out these decisions…We must do more to give greater say to women in addressing the climate challenge.” So why have they been ignored yet again?

The secretary-general and the co-chairs of the advisory group can correct this by expanding the membership of the group to include meaningful representation of female officials before the group’s first meeting in London at the end of the month. 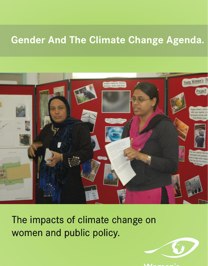 The Women’s Environment Network has also just released a major new report assessing the gendered impacts of climate change worldwide, which I’m still kicking myself because I’ve not had time to read, but specifically concludes:

The most effective way of ensuring that all three of the above priorities are met is increasing the representation of women in decision-making bodies, particularly at the national and international level.

Photo by Oxfam International, shared on Flickr under a Creative Commons license