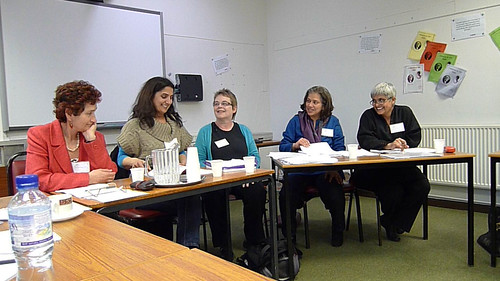 Photo of the Women Against Fundamentalism panel by helen.2006 used with a creative commons licence

On 12-13th March I attended the Women’s Liberation Movement @ 40 conference held at Ruskin College, Oxford; the site of the original conference in 1970 at which several of the WLM’s original demands were developed.

It was a really interesting couple of days. Along with wearing my fingers down to stubs by obsessively live tweeting the conference for those who couldn’t make it, I enjoyed listening to various thought-provoking and challenging talks by various academic and activist feminists (although of course the two aren’t mutually exclusive!).

There was a good mix of ages and a pretty positive atmosphere, although many attendees were concerned that some people couldn’t attend as they couldn’t afford the conference fee; a problem not just for this conference but all similar events held in Universities nowadays. Whilst subsidised childcare was offered, some were worried that mothers would not be able to attend, although others raised their hands and said “we’re here!”.

Whilst there would be a lot of interesting points to pick up on and so much to report, I’m not going to attempt to review every session. Instead I’ll just mention a few general points and impressions from my personal perspective.

Comments have been left open on this blog post. Did you attend? Feel free to share your thoughts on this conference.