Quick shout out to Women’s Web, and other news

This recent feature about the challenging facing Indian women who relocate overseas because of their spouse’s job includes this quote from an expat here in the UK:

The loss is not just of friends and family but also that of a career. Many women, especially those from metros, leave India at the prime of their careers. Finding themselves dependent on the spouse financially can be extremely depressing. “I felt small asking my husband for money, for little things, especially if I needed to shop for myself”, says Anindita*, 28, a former Kolkata-based copywriter, who moved to the UK two years ago, but hasn’t been able to get a work permit.

And, talking about the particular risks faced by women in violent or abusive relationships mentions the Asian Women Resource Centre and the Yorkshire-based refuge Ashiana in the UK.

Meanwhile, a new book suggests that London is the most unequal city in the developed world, and the UK as a whole is still extremely unequal:

In Europe, only Portugal appears more unequal than Britain. Instead of seeking to reduce inequalities, Westminster politicians simply accept that it is unfortunate but inevitable, rather than seeing it as undoing the “warp and weft of society”.

Feminism 101 has updated with an FAQ on ‘What’s wrong with suggesting that women take precautions to prevent being raped?’

Ghana Think Tank reverses the usual flow of advice from rich countries to poor countries, from privileged to marginalised. One of the projects involved asking people in Wales what their problems are, then getting a series of think tanks together to come up with solutions, in Ghana, Mexico, Serbia, Iran, and a group of incarcerated girls in the US prison system. See more here, and at Boing Boing.

What is collective liberation? Ambling Along the Aqueduct highlights this concept, with a quote from Aurora Morales who (I think) coined the term:

Solidarity comes from the inability to tolerate the affront to our own integrity of passive or active collaboration in the oppression of others, and from the deep recognition of our most expansive self-interest. From the recognition that, like it or not, our liberation is bound up with that of every other being on the planet, and that politically, spiritually, in our heart of hearts we know anything else is unaffordable.

Also, a lot of people have defined her, as well as jazz musician Sun Ra, as “Afrofuturists”–people who took this idea of “intergalactic” music–music that reached back into ancient times and then reached forward and beyond what had ever been done before. That’s a concept I’ve also embraced as a musician. The Association for the Advancement of Creative Musicians (AACM) also embraced this “ancient to future” concept. It’s almost like being a scientist–by using music as a way to experiment with new sounds and understanding the impact it can have and understanding its power to be transformative and inspirational to people. That’s what I’m trying to do with Intergalactic Beings out of my inspirations of Octavia Butler.

What do men need liberating from? asks The Life and Times of an Indian Homemaker, coming up with some very concrete examples of how fighting patriarchy may erode male privilege, but will also open up men’s lives.

A lesbian couple in Brighton have become the first same-sex couple to use the legal right to be jointly named on their baby’s birth certificate, reports Lesbilicious. 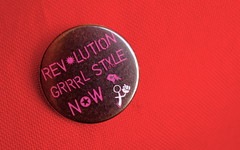 Racialicious highlights the underrepresentation of black plus size models in the mainstream media:

The “fatshion” movement has made it obvious to the maintream fashion establishment that there is a market out there for fashion-forward clothing in larger sizes. Any survey of the fatshion blogosphere will tell you that a great percentage of that market is black. Why are mainstream fashion mags so reluctant to include black plus size models in their spreads, and why do the “high fat fashion” retailers use all white faces as their representatives?

Nezua posts about issues of comment moderation and choosing not to centre hateful speech.

Sociological Images highlights a photo project in which:

The subjects, self-identified people of transgender, transsexual, genderqueer, gender-variant, or gender non-conforming experience, hold signs depicting questions that each has had posed to them personally — some by strangers, others by loved ones, friends, or colleagues. Presented on white wooden boards, the questions are turned on the viewer, shifting the dynamics under which they were originally asked, and prompting the viewer to cast a reflective, self-critical eye upon him or herself, revealing how invasive this frame of reference can be.

Sheila Rowbotham has a new book out about women’s influence on UK and US life from the 1880s-1920s – and she’s speaking next month in London.

In June there will be a weekend in the Peak District for women involved in the 1970s Women’s Liberation Movement.

An IFS study adds to the evidence that the Tory plan for a marriage tax break is based on shaky ground:

The Institute for Fiscal Studies found that while the children of married couples progressed faster, this was a reflection of differences in the social and economic status of those who decide to get married instead of just living together.

A local journal has put together a extremely thorough series on the history of forced sterilisation in North Carolina.

Stuff White People Do looks at how a cosmetics company markets it’s ‘natural’ products under the brand-name “Primitive”.

Photo by gaelx, shared on Flickr under Creative Commons license