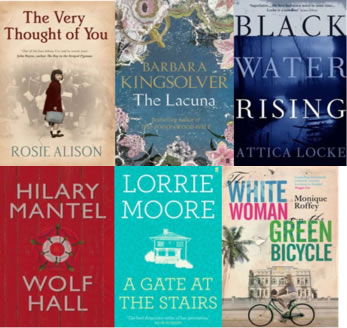 Women are drastically under-represented in bookshops, galleries, theatres, lecture series, Bidisha says in The Guardian, making the case in her usual fantastic style.

Events organisers, editors in broadcasting and the media, radio and TV producers, commissioners and jurors. They are male and female, they probably don’t realise they’re doing it, but they don’t mind. They’re fine with a virtually woman-free world.

To witness femicide in action, go to the town of Hay this May. At the same time as the annual book festival is an unrelated philosophy festival called How The Light Gets In. There are 25 debates covering broad themes such as evolution, the urban space, creativity, violence and privacy. All but two of these events are male-dominated. Eight are men-only, opening with “Being Human in the 21st century.” Ha ha ha ha ha ha. Four white men are going to discuss all the facets of the human experience. Thirteen discussions have just one woman and either four or three men, and one has one woman and two men. One event is a screening of a guy’s film. Two talks have two men and two women. And that’s it. I was scheduled to attend and was hugely relieved when other obligations meant I had to drop out. I know from experience that female participation in events that massively underrepresent women does not change anything. Year on year the ratio stays the same. How The Light Gets In gives 56 different men the opportunity to speak. It offers the same opportunity to just 11 women. Alongside the talks are evening events featuring a well-chosen and original roster of musicians, DJs and comedians. The gender balance here is markedly better. Did two different people organise these two sides of the festival? Perhaps women are considered fine as light entertainment, but unnecessary when it comes to the serious stuff.

Bidisha says, very understandably, that she no longer feels like attending as a token woman on panels dominated by men. She notes that this drastic underrepresentation continues, despite the fact that women “equal or outnumber men as attendees of arts festivals, concerts, readings, discussions and debates, and as arts and humanities students at university. Women write, read, edit and publicise more fiction than men. Women make up the majority of executive, PR and organisational staff in arts and cultural institutions. Women’s ticket revenue, licence fees, book purchases and entrance fees are being used to fund events at which women artists and thinkers are marginalised with breathtaking obviousness.”

So, in that spirit, here is the shortlist for the Orange Prize this year:

My plan is to read the whole shortlist, preferably before the winner is announced – although Wolf Hall is huge, so I may not make it! I’ve stolen this idea from Kirsty at Other Stories, who is trying to read the long-list. Cath Elliot’s giving it a go as well.