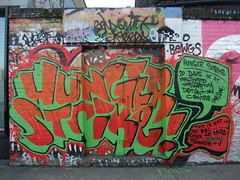 The case is likely to be heard in March:

“Over 70 women were locked for several hours in a hot, airless corridor . . . and forced to urinate and vomit where they stood,” Birmingham-based law firm Public Interest Lawyers or PIL, which is representing the four women, said in a public statement on the case. “Several women collapsed but received no medical assistance, and a window was slammed on one detainee’s finger, ripping her nail off. One of PIL’s clients was beaten by guards using riot shields as she and 18 other women were detained outside in the snow for over four hours.”

Charges of routine mistreatment also leveled at the Home Office by Public Interest Lawyers include racist abuse by center staff and opening of personal mail.

Home Office Minister Meg Hillier stirred controversy after she wrote to members of Parliament to dispute the authenticity of the hunger strike, saying strikers were in fact buying food from the center’s shop and receiving supplies from guests. The hunger strikers denied Hillier’s claims in a statement issued via the London-based Black Women’s Rape Action Project.

Women who had suffered severe physical and sexual abuse were being held at Yarl’s Wood under a procedure for expediting assessment of asylum claims, two rights groups found in March. In their joint assessment, both groups said high-speed processing did not give women “the opportunity to reveal relevant information that would substantiate their cases.” The findings came from the London-based Medical Foundation for the Care of Victims of Torture and New York-based Human Rights Watch.

Photo by mermaid99, shared on Flickr under a Creative Commons license