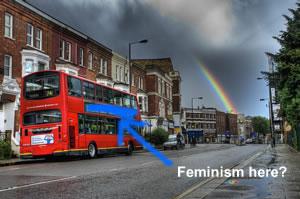 A while back in comments, the notion of a feminist bus ad campaign, as an antidote to some victim-blaming ‘anti-rape’ ads by TfL.

Sian of Sian and Crooked Rib has posted her ideas following up on this on her blog:

[Headline] MEN! Don’t drink and date rape
[subhead] Many rapes happen when the rapist is under the influence of alcohol. Don’t let it happen to you

[Headline] MEN! Confused about consent?
[subhead] It’s easy! Just remember, no means no whether said before or during intercourse.

[Headline] MEN! That girl at the bar giving you the eye?
[subhead] Just remember! She’s not giving an invitation to rape

[Headline] MEN! make a stand this Saturday night!
[subhead] And don’t turn her into a crime statistic

I particularly like the first one which i think could be designed like the don’t drink and drive ad – with Stop written in yellow on the road surface.

Taking the snarky point made by Sexual assault tips guaranteed to work, and turning it into a serious campaign to turn rape prevention ads on their heads?

Photo by djsosumi, shared on Flickr under a Creative Commons license