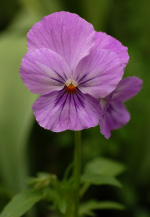 Manchester-based artist Paul Harfleet started The Pansy Project when he began to revisit various city streets to plant pansies at the sites of homophobic abuse.

A string of homophobic abuse on a warm summer’s day was the catalyst for this project. The day began with two builders shouting; “it’s about time we went gaybashing again isn’t it?”; continued with a gang of yobs throwing abuse and stones at my boyfriend and me, and ended with a bizarre and unsettling confrontation with a man who called us ‘ladies’ under his breath.

Paul decided that planting a small unmarked living plant at the site would correspond with the nature of the abuse: a plant would continue to grow, as he did through his experience. As he says:

Placing a live plant felt like a positive action, it was a comment on the abuse; a potential ‘remedy’.

The species of plant was of course vitally important and the pansy instantly seemed perfect. Not only does the word refer to an effeminate or gay man: The name of the flower originates from the French verb; pensar (to think), as the bowing head of the flower was seen to visually echo a person in deep thought. The subtlety and elegiac quality of the flower was ideal for my requirements. The action of planting reinforced these qualities, as kneeling in the street and digging in the often neglected hedgerows felt like a sorrowful act. The bowing heads of the flowers became mournful symbols of indignant acceptance.

Each pansy’s location is named after the abuse received and the project consists of the website, photographs and installations at sites of homophobia. In the five years since he began The Pansy Project, it’s been embraced by many in the gay community, who see it as way to deal with an experience shared by many. To my mind, the idea that art – living art – can challenge the brutality and ugliness of hate is actually quite beautiful and looking through the website, I think it’s hard not to be moved by it.

And yet, earlier this week, Paul’s Facebook group page was summarily removed by the site’s administrators on the grounds that “it transgressed their regulations”. Although Paul has requsted clarification from Facebook, none has been forthcoming. He has now set up a new page – Bring back THE PANSY PROJECT now – which he’s using while he waits to hear back from Facebook.

Curtsey to Earwicga for the heads-up