Bumps in road for EU-wide protections for domestic violence victims

Efforts by the Spanish government to introduce EU-wide protection orders for victims of domestic violence, are hitting some roadblocks, EUObserver is reporting.

You might remember that Spain introduced the idea as a priority back in January, when it took the EU presidency. At that time, the Spanish government made some revealing remarks about the lack of attention given in the EU process to violence against women. 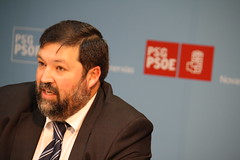 Well, according to EUObserver, the idea is not going down well. Spanish Justice Minister Francisco Caamaño (right) says that a majority of member states agree to the idea, while the European Commission, which opposes it, has Justice Commissioner Vivian Reding saying: “There is no council agreement. A majority of member states have problems with the current proposal.” She even threatened to take the European Council (made up of government representatives of the 27 member states) to court to challenge the proposal if it goes ahead.

Opposition apparently centres on differences between the legal systems of EU member states:

But different legal traditions in dealing with gender violence have prompted several member states to raise doubts about the current proposal. While a woman in Spain can be granted protection if her partner has no criminal record or has only threatened her with acts of violence, the law is much more restrictive in Austria, for instance, where such orders are issued only in criminal investigations or for already convicted felons.

Madrid has argued that these discrepancies are all the more reason to have an EU-wide tool which is recognised in all member states.

“There are 8,000 Romanian women in Spain who have protection orders. They should be able to go back to their own country and enjoy the same level of protection. The same should also work for the 800 or so Germans. People move freely around Europe and should enjoy the same level of protection,” Spanish justice minister Francisco Caamano said during a press briefing following the meeting with his 26 EU counterparts.

Some might argue that the priority should be to remove the blocks and bring protection for victims of domestic violence to the highest standard in the EU, of course.

Photo shared by PDseG on Flickr under a Creative Commons license