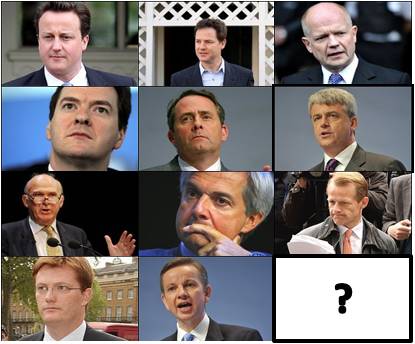 Update: err, oops. I seem to have been writing this at the same time as Jess was writing hers, but she pipped me to the post. Sorry, Jess!

Update #2: (what I think is) the full cabinet has now been announced and it is a sea of white people. The single minority representative is Baroness Sayeeda Warsi, who becomes the first Muslim woman to serve in Cabinet as Conservative Party Chairman. The Cabinet has 4 female representatives out of 23 posts (that’s 17%, folks). There’s another 6 white men attending cabinet, so the meetings will be 14% female and 3% minority ethnic. For the record, the most recent national population estimates put us at 16% non White British. The full cabinet line up is here.

So women’s representation in parliament may have inched up, but so far Cameron’s cabinet seems woefully lacking in any diversity whatsoever.

Obviously the situation’s moving quickly but, as of Wednesday morning, the posts which have been announced (and they’re the most important ones) have gone exclusively to white men. Step forward: Deputy Prime Minister, Nick Clegg; Foreign Secretary William Hague; Chancellor George Osborne (yes, he’s taking charge of our recession stricken economy with a degree in history and never having held a proper job); Defense Secretary Liam Fox; Health Secretary Andrew Lansley; Business & Banking Secretary Vince Cable; and Energy & Climate Change Secretary Chris Huhne. At time of writing the BBC also expects David Laws, Danny Alexander and Michael Gove to have some cabinet role yet to be announced.

White men the lot of ’em. All but two of them graduated from Oxbridge, and the majority of them went to private schools. I can see Cameron really meant it when he promised ‘change’. Where is Theresa May? Caroline Spelman? Sayeeda Warsi? Are they the ministers who will to ‘fall on their swords’ to make space for the white men the Lib Dems are putting forward?

Cameron’s shadow cabinet was pretty sorely lacking in diversity, but his actual cabinet so far is worse still. I suppose that’s not entirely surprising given the profile of the people from each party doing the negotiating (the title of that article says it all). Let’s hope that things pick up rapidly as new announcements emerge from No10.

So far, none of the female shadow ministers have been displaced in the announcements but some relatively senior white men have been, and it seems possible there could be some ‘bumping down’ through the hierarchy of portfolios until the women (including the single Asian member) of the shadow cabinet get bumped into junior ministerial positions.

For a whole host of reasons we should be keeping a beady eye on Cameron’s government. This is just the first.