President Obama has announced Elena Kagan as nominee for his second judicial appointment to the US Supreme Court. If confirmed by Congress, Kagan would be his second female appointment to the court (his previous appointment was Sonia Sotomayor who was the first Hispanic justice and only the third woman in the history of the court). There are rumours that Kagan may also be a lesbian. 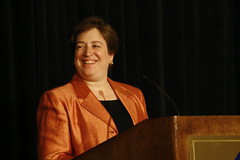 Usually we judge a prospective justice by their track record of decisions, which are a matter of public record and come under intense scrutiny during the confirmation process. Kagan is unusual in that she has never been a judge before, although she is currently Solicitor General, and has been discussed as a potential nominee for some time.

This might seem like a win for diversity on paper, however people have started to talk about how much of an advocate for diversity she will really be. Those digging through her public record have noted that she has a pretty questionable record on hiring minority candidates and women, which seems concerning.

Prior to becoming Solicitor General, she was the Dean of Harvard Law School, and a high profile one, credited with turning the institution around. She’s credited with making “amazing changes” to the school, and particularly for the number of new professors she hired. However, of the 32 new hires she made, only 1 was a minority (and only 7 were women). This is troubling, and merits investigation. Salon has a long piece going into the details of who she did and didn’t hire, and why it’s a problem, but it was this post by Tasha Fierce which particularly struck me:

If she was nominated by a Republican president, every social justice activist organization would be all over this record like white on rice. It’s inexcusable. And to say that the statistics don’t take into account offers made? Anyone who lets that slide by has the privilege to let it slide by. Powerful white women should be held to the same standard as powerful white men when it comes to racial issues

Dan Kennedy on Comment is Free presents a series of reasons to suspect that Kagan might be less liberal than the Justice (John Paul Stevens) who she replaces although, interestingly, he makes no mention of her woeful hiring track record.

This is of huge importance for lots of issues in the US, because the Supreme Court ultimately rules on what is and isn’t legal (‘constitutional’) through a case law process, and their appointments are for life. A new appointment is amongst the most significant and lasting things any President will do in determining the course of American politics over the long term, and not all of them even get the chance to appoint one.

Issues like the right to abortion hang by a slender majority on what is actually fairly shaky legal grounding and are always a hair’s breadth away from being overturned by the court, so its composition is of huge importance to American women. And to a lesser extent for British women as well, because in many ways the US sets a precedent for us. Arguably the current pressure on abortion time limits in the UK is partly due to the trend towards limiting abortion rights in US states.

Kagan looks on the face of it like a win for progressive politics in the US but, digging a little deeper, it sounds like those who are fighting for social justice in the US are questioning whether she is the one to deliver it.

Image by dsearls, shared under a Creative Commons license. Thank you!