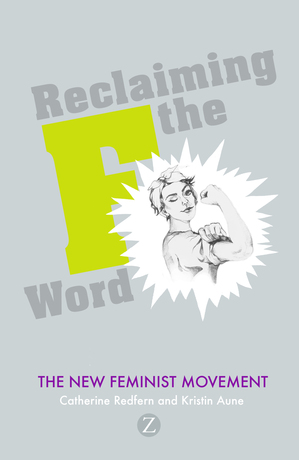 My book with Kristin Aune – Reclaiming The F Word – is published next week!

It’s been a very long time coming and I can hardly believe it’s finally here.

Since I founded The F Word in 2001 I’ve been astonished and frustrated with reading, over and over again, that feminism is dead despite all of the amazing, inspirational activism that’s happening all over the world and the UK on a daily basis. Our book attempts to finally quash that myth once and for all, and to celebrate the feminist activists who are active today, who have formed new groups, organisations, events and who are fighting in new ways and old ways.

We wanted to try, as best as we could, to give a taster of feminist issues and activism as it is today.

So, you can read a sample of our book at Scribd, and you can find out more about it on our website

Publishing a book about feminism is absolutely terrifying. We’re writing from within the community; we’re feminists ourselves, not external dispassionate observers. The opinion of other feminists about what we’ve done is important to us.

But we’ve received some good feedback so far:

“A lucid and lively examination of the state of contemporary feminism from two women who really know what they’re talking about. Most importantly, at a time when it’s easy to feel down-hearted about the state we’re in, this book is full of hope.”

“Savvy, witty and politically passionate, Reclaiming the F Word explains what today’s feminists want, and describes what they are doing to make it happen.”

“There has never been a better, more exciting time to be a feminist. This book shows the positive impact of feminism on our daily lives. ‘Reclaiming The F-Word’ should be every woman’s – and many men’s – bedside companion.”

Zoe Margolis AKA Abby Lee, author of Girl With A One Track Mind.

“‘With verve and immediacy, Reclaiming the F Word provides feisty retorts to

those tired claims that feminism is dead.”

“Redfern and Aune’s contribution on women’s political involvement provides a robust and important contribution to this rejuvenated feminist debate… Reclaiming the F Word has a practical list of suggestions for actions you can take to change the things that stop half the world being all they can be, lists of books you might want to read, groups you can join (or set up) and a warm sisterly tone of congratulation to everyone who has ever challenged even the tiniest belittlement of women. ‘Feminists, if you are downhearted, we hope we’ve changed your mind. You are not alone’; write Redfern and Aune in this must-have DIY guide to feminist action.”

“Reclaiming the F Word is a statement of why feminism is still necessary, is a recognition of the amazing work that’s being done, and is a rallying cry to women and men everywhere to get involved. It strikes a great balance between these themes, and the thorough research, clear and honest writing, and unabashed celebration of feminism in all its myriad forms mean that everybody can take something positive away from reading this book… What the writers also show, though, are the huge numbers of women (and men) who keep fighting, in a seemingly never-ending variety of ways. The pages are bursting with the activities and achievements of feminists engaging in a wide range of activism. Some of these I knew about (such as the Pink Stinks campaign), but others were new to me (like Robogals), and I found myself frequently running to my computer to look up more details about particular projects. ”

“…wide-ranging, the most globally-oriented and in many respects the most radical… Also, though it isn’t ‘academic’ in the narrow sense, its broad range of reference makes it probably the most suitable for student readers who want to use feminist ideas in an academic context… practical, positive, and refreshingly free from navel-gazing.”

“‘Reclaiming the F-Word’ is a wonderful book, in that it gives a general overview and introduction to feminism today. …the authors outline seven areas that are the most important to feminists today, then go on to explain why they are important, what feminists are already doing to address these areas and to give suggestions of what you can do… The introduction to the issue which made up the bulk of each section was easy to read and accessible. It focused on a range of issues related to the main issue and tried to broach issues specific to different people; rather than focusing mainly on the white middle-class, as feminism is often accused of doing.”

“A really good — & heartening — statement of where feminism is now, according to Redfern & Aune. The book responds to the too-often heard, supposed truisms that 1) feminism has gone too far & 2) feminism is dead. Neither, of course, are true, and the authors do a great job of showing why this is so.”

You can buy the book from our publisher zedbooks.co.uk or other bookshops. I will be posting a discount code for F Word readers as soon as I have it!

I’ll also be posting up some more results from our survey here soon too, like I promised to do ages ago but didn’t get round to!