Unemployed? On a low income? Make sure you vote! 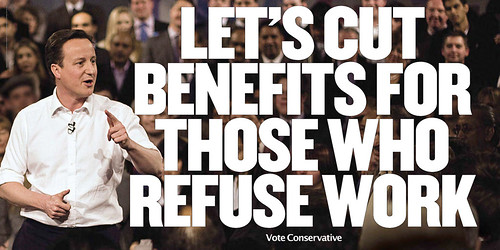 I think the poster says it all. For all the hug-a-hoodie bluster and smooth talking about “compassionate conservatism”, it seems the Tories are still willing to go after anyone who isn’t already part of the elite or willing and able to play their game. What with hating on unemployed people being so very fashionable at the moment, the tough-talking slogan “Let’s cut benefits for those who refuse to work” is certainly an easy line to throw out there. It fits perfectly next to the template poster backdrop of Cameron in mid-flow, with his finger in the air as if he’s got some no-nonsense idea that just can’t fail. It matters little that the notion is nothing new. It makes no difference that benefit claimants are already being pitched against each other in the undignified flurry to have to show who is more “deserving” and who is “taking the piss” when they should be helped to support each other and fight for their rights. Because, of course, there are no rights in a climate where a beggars-can’t-be-choosers ethic seems to dominate popular thinking and it appears to be widely considered perfectly okay for an underclass who are seen to have failed to prove themselves to be forced to do the jobs those with enough capital to not need to claim benefits can refuse. Unethical employers can always find someone to exploit under such a regime. It’s business as usual.

In keeping with this predictable vibe, the Prime Ministerial debate in Bristol a couple of weeks ago saw Cameron making a total of seven references to people who “have done the right thing” and talking about such people apparently getting “penalised and punished” by the system:

“I want to make sure that when we see people going into old age, that if you have worked hard, if you’ve saved, if you’ve put money aside, you are not punished and that’s why we say as well it is not right that you should have to pay for your residential care and someone who didn’t do the right thing gets the whole thing paid for free, that’s not fair and we are going to change that.”

The values are clear: look after high earners and those who tow the line and “do the right thing” according to Conservative values, while those with enough privilege not to need to are home and dry anyway, regardless of how they conduct themselves. People living in poverty who fail to make ends meet despite trying or -worse still- dare not to bother to wear themselves out in some attempt to be seen to be Doing the Right Thing can forget it.

And what exactly is “doing the right thing” anyway? For example, I’m frugal and try to save money when I can. Does this mean I should feel some sense of smug satisfaction when someone who hasn’t is left to fend for themselves? Others might have worked all hours in jobs they hate and live for the day they retire so they can get a decent pension but what about those who didn’t, for whatever reason? What about someone whose career plans didn’t work out? What about people who lacked privilege and failed to pull themselves up by the bootstraps like a good Tory is supposed to, regardless of circumstances? To hell with them eh Cameron? What happened to the concept of dignity for all? Are we going to admit defeat and say it died along with old Labour?

I would say those of us who still believe in such concepts need to prove it hasn’t by making sure we vote for whoever can beat the Tories in our areas. I realise the other options are not necessarily ideal but those of us who will be most negatively effected by the Tory regime need to make our voices heard.

Photo of Conservative campaign poster sourced on Flickr through the conservativeparty profile. Please go here if you come to this page and find it is no longer up.