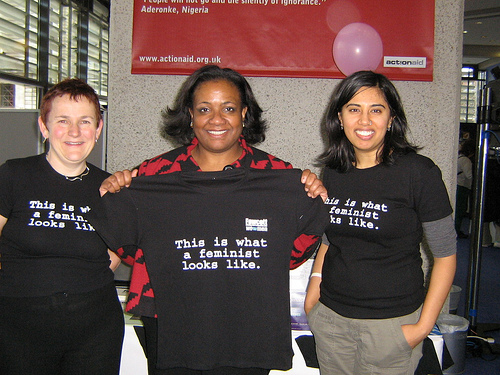 I’ve been keeping up with the Labour leadership elections recently. We’ve talked about how until Abbott threw her hat in the ring it was a race populated by white men who were apparently very similar in a lot of respects. But since the campaign has started proper I’ve noticed an interesting phenomenon. Does anyone else see Abbott being overlooked by the mainstream political press?

I’m not talking about features and profiles, there have been plenty of them. I’m talking more about the punditry and the comment. Take the two examples that had me spluttering into my coffee in the last couple of weeks.

First, The Economist did a spread on the leadership candidates which managed to COMPLETELY exclude her. I’m talking a two-page spread, with a single line chucked up front which read:

(A relative outsider is standing, too, but an unelectably left-wing one: Diane Abbott, from London’s East End, won the required 33 nominations from Labour MPs by the deadline of June 9th.)

(Brackets in the original. Insulting, huh?)

I was pretty cross, but I charitably put it down to print deadlines. There wasn’t much in there about Andy Burham either, but there was more than a parenthetical dismissive sentence.

Second, the Newsnight leadership hustings which were on TV last week (you can watch it again or read a quasi-transcript here). Diane Abbott managed more than a mention in this one, she actually got to participate (!) (Economist – are you taking notes?). And I thought she did really well. And so did the folks I follow on Twitter although I will grant you that’s about as far away from a random sample as one’s likely to get.

But so, it seems, did the audience. After the 30 minutes or so of debate, Newsnight moved onto other news stories of the day and then, just before closing, wheeled out the political editor, Michael Crick. He and Paxo had a little chat about the hustings, the aim being to see who’d done best and as he opened he said something remarkable. He said that Diane Abbott seemed to have done best as far as the studio audience were concerned. That wasn’t the remarkable part. I thought she had too.

The remarkable part was that he went on to disregard that point entirely and have a serious ‘talk amongst men’ with Paxo about the relative performances of the men. Which was something of a ‘WTF?’ moment for me, perched on my bed watching one of the most senior political journalists in the UK display such spectacular disregard for her.

I’m not sure of the reason for this apparent bias. Are they overlooking her because she’s female? Because she’s black? Because she’s left wing? You might be tempted to think it’s because she’s an outsider in the race (as the Economist so ably demonstrated with their damning parentheses). But think back to the recent general election, and the first Leaders’ debate. Nick Clegg seemed to do best in the first debate as far as the snap polls of the viewers were concerned. What happened when he, a distant outsider with no hope of winning the election did well? Cleggmania! The pundits couldn’t stop gushing. They were falling over themselves to declare a change in the historic pecking order of the candidates, that the debates had changed the way we do politics in this country. What happened in the election, after all that media hype? The Lib Dems did worse than usual. Let’s not fool ourselves that if the pundits are ignoring Abbott it’s because she’s a long shot. The British love an underdog. If they’re not rating her: why not?

(Full disclosure: I’m a member of the Labour Party, voting Abbott, and one of her constituents. I also helped her out with some canvassing during the recent election)

Image is by Fawcett via Flickr. It’s not specifically licensed for creative commons use, but I if anyone from Fawcett objects just let us know and we’ll take it down! PS – Hi, Zo!