One great thing about the internet, which is helped a lot by twitter, is the immediacy of information. When something goes wrong, all sorts of people can rally round and react, sometimes within minutes of the event itself.

So things happened like that tonight. @LGBTLabour posted the following messages on their twitterfeed.

Within minutes, this became a Trending Topic on twitter, meaning it was one of the most talked about things at that time. The discussion, now with the tag #bigotbar, is still ongoing. And people are starting to discuss actions like boycotts, and mass emails to the Punch Taverns who own the pub involved.

As Grace Fletcher-Hackwood has said, they picked the wrong LGBTs to mess with! She also gives links to some pub review sites which accept comments on pubs, and the contact details of the Chair of Licensing for Westminster Council.

Sarah Brown joined in, with

All of that is why I love the internet.

But then, as quickly as things rise, they can also start to descend. A few jokes here and there. A few jibes. The point that someone has been treated so appallingly on the basis of their gender or sexuality gets overtaken by the vital importance of a witty pun on the situation. Equally, facts start to change a little, and get edited and shortened, often cutting out key information.

So let’s stop introducing exclusivity and bullying into a human rights matter. The Greencoat Boy pub have actually broken the law, in refusing to provide a service to people on the grounds of their sexuality and gender. That goes against The Equality Act 2010, I’m told.

If you are as angry as I am about this, those links above, in this post, will give you a place to start on what action you might want to take. There are people to contact, and if you want to boycott premises in your area which are run by Punch Taverns, you can find out where your local Punch Taverns pubs are here.

And keep an eye out for updates – here on The F Word of course, with a Greencoat Boy search on twitter, on blogs and such.

I am so, so glad that our society is in a place where many people’s initial reaction to something like this is to be outraged, not resigned to it. That the people involved want to fight, rather than feel shamed by these bigoted actions. That others are jumping in, sharing information and working stuff out together to try and make this the last, ever, place in Britain that refuses service to someone because of their gender or sexuality.

Well, we can dream.

Edited to add, another great point has been made by @Lisybabe: 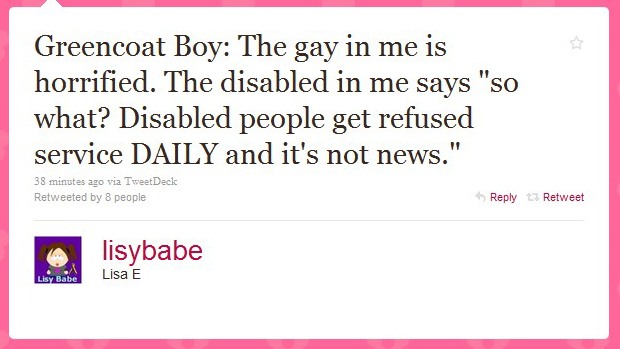