The gendered impact of the emergency Budget 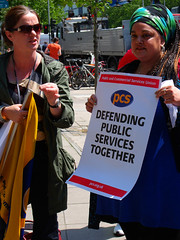 The cuts have started, the emergency Budget is out. As Fawcett sets out the cuts are going to hit women hard.

Reducing women’s economic security in this way risks rolling back on women’s independence – as more women are forced to rely on their families and the state for financial support.

The LibCon coalition’s attempts to portray this as a “progressive” budget ring hollow indeed (and an analysis by the Institute for Fiscal Studies concludes what a layperson might conclude, that the budget is in fact regressive (and even the Financial Times money supply blog agrees).

The macroeconomic picture is one thing, but Lisa’s story about the impact of the cuts on her particularly demonstrates on an individual level what this means.

Photo of union protest against cuts earlier this week by staticgirl, shared under a Creative Commons license on Flickr