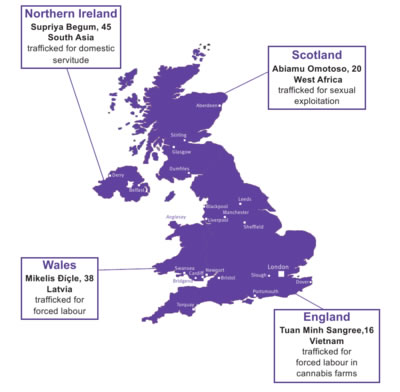 Worrying news about the failures of the UK’s approach to human trafficking, as ill-equipped Border Agency staff react to victims with an anti-immigrant mentality.

The major report by a coalition including Anti-Slavery International, Amnesty International UK and TARA, is based on reviews of 390 individual cases, data from the UK Human Trafficking Centre and figures obtained from freedom of information requests.

The report also criticises Border Agency staff for decision-making showing little understanding of trafficking issues. In one case a West African woman in her twenties was told that though her “experiences” of being forced to have sex with strange men were “extremely unpleasant”, this did “not amount to trafficking” because she had failed to escape her tormentors when she had the opportunity. In another case, a woman who for three months was forced to work 18-hour days as a domestic worker was told by officials that because this had happened in 2008 she should now have “overcome any trauma” she had suffered.

The report argues that the government has lost sight of the key pillars of anti-trafficking – identification, protection, prosecution and prevention – with “no meaningful” prevention measures being undertaken and prosecutions of traffickers apparently losing out to prosecutions of possible victims for offences committed under duress (including children who had been forced to work in brothels or cannabis “factories” ). In the nine months to January 2010, for example, only 36 individuals had trafficking offences brought to court, despite the government estimating that some 5,000 trafficked people are currently in the UK. Police officers quoted by the report complain of the “negative effect” of decision-making which can prevent victims assisting with prosecutions. Campaigners are warning that one consequence of the system’s failings is that vital intelligence about the activities of trafficking gangs is being lost to the police and other agencies.