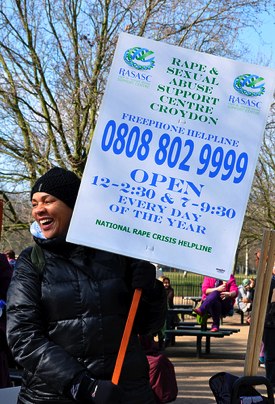 Croydon’s Rape and Sexual Abuse Support Centre is having its funding cut by £27,000 a year – while the top Tories in the council are giving themselves pay rises.

This is the currently the only rape crisis centre in London one of only two rape crisis centres in London (the new Ealing centre is already open), and it may have to close its waiting list if the funding cut goes ahead. Via gorilerof3b, RASASC is asking people to write direct to council leader Mike Fisher:

We need your help – urgently. A decision was made to cut the Corporate Funding Budget of Croydon Council two weeks ago and there was pressure on the Council Lead, Mike Fisher, to do some cost saving, pretty quick.

Fisher chose the easiest option as the corporate funding applications were due for ratification. So instead of cutting jobs, pensions, council staff or even not giving the third sector an inflationary rise across the board – he gave himself a rise in pay and slashed one department’s budget of £1 million!

The cuts for RASASC of £27,000 per year is the equivalent of supporting 2,700 survivors of sexual violence on our helpline, seeing 23 survivors face to face for one year specialist counselling or supporting 108 survivors through our Advocacy department from reporting their rape to the end of their trial. We need your help to save our services! Please email [email protected] to voice your disgust at these cuts and speak for the thousands of London women this will affect. It will only take 5 minutes of your time but may stop the only Rape Crisis Centre in London from having to close our waiting list.

They have put together a model letter which gorilerof3b has also posted.