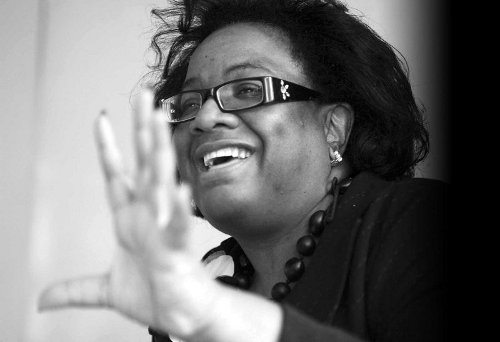 Feminists: Why you should join Labour to vote Diane

Diane Abbott is standing for the leadership of the Labour party. She’s the only candidate with a record of activism for social justice. You may not realise you can influence the outcome of the election but you can: even if you’re not a Party member already, you can join the now from just £1 and be allowed to vote. Lynne Miles and Chitra Nagarajan think you should. This is why.

We’re writing this as two feminist activists who live in Diane’s Hackney constituency. We’re both natural Labour supporters who have always been ambivalent about the Labour Party. Nevertheless, we joined after the election, partly to vote for Diane, and now we’ve signed up to help her grassroots campaign. We’ve been activists for years and we feel that now is the time to step up and change the system from the inside as well as criticising it. We marched and protested during the Labour years but we know that we’ll do it a lot more under the coalition government. For all its faults, the Labour Party has been, and remains, the best hope for social justice and equality in this country. Think about this: what would the UK look like today without the Labour movement’s legacy? No NHS, no votes for women, no free universal education, no minimum wage? But it needs to be better. We have five candidates standing for the leadership. Four of them offer the same predictable mix of New Labour good and bad. Diane Abbott offers something exciting and genuinely different.

We have seen first-hand the good she has done for the community and specifically the most disadvantaged people who live here. Over Labour’s 13 years in power, Diane supported the best of Labour’s policies (SureStart, the Equalities Act, civil partnerships) and publicly criticised the worst (Iraq, outsourcing torture, ID cards).

She was an activist before she was a politician, and she’s a proud feminist. She is pro-choice, she spoke out against Labour’s benefit cuts for single mothers, and she is active in campaigns to improve school achievement for black inner city children. We’ve also been impressed by the number of local people we’ve seen stop and thank her for helping them.

If Diane is going to win, it is because she is bringing people into the party. Feminists can help her: we can join the Labour Party for as little as £1, and we can vote for her. The rules state that anyone who joins up to and including the 8th September has a vote. The other candidates are career politicians who have been lining up their leadership bids for months, even years. They have wealthy sponsors and large, professional campaign teams. But none of them are inspiring enough that people will join the party just to vote for them.

We think Diane is.

There are an estimated 175,000 members of the Labour Party, of which almost 25,000 have joined since the start of the election. New members could decide the outcome. There are tens, even hundreds of thousands of feminists in this country. We’re enough to make a difference. Even if Diane doesn’t win, the more votes she gets, the more influential she will be in shaping the future of the Party.

She is a politician in the best sense of the word: she stands up for what she believes to be right, and what is best for her constituents. Diane represents a real possibility for the Labour party. You’re her best chance of bringing it back to its core values. We’re asking feminists to do what we did. Join the Party. Vote for Diane Abbott. Tell others to do likewise. Bring feminist voices into the political mainstream.

To find out more about joining the Labour Party, click here

To find out more about how you can help Diane’s grassroots campaign across the UK, click here

Please note: this should always go without saying anyway but, for clarification, what’s written here is the opinion of Lynne Miles (F Word Blogger) and Chitra Nagarajan personally: it is not the ‘Official F Word View’. Neither is it written in conjunction with the ‘Diane 4 Leader’ team.