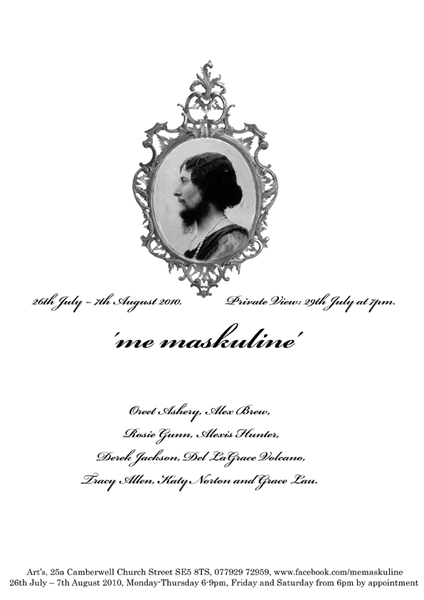 This art and video exhibition in London on masculinity looks interesting. From the press release:

‘me maskuline’ is an exhibition of photography and video works exposing masculinity. The exhibition will take place at ArtsBar, Camberwell from 26th July to 7th August.

Alex Brew, curator and exhibiting artist said: “Masculinity is seen as normal. It’s never seen as an act or fake. Rarely questioned, it’s the norm, unchallengeable. Femininity – that’s meant to be the thing that’s a put on. Make-up, heels, implants. Femininity can be moulded and enhanced. Putting aside the stereotypes, masculinity’s just as much of a show. Even a tease.

“My work is looking at how I interact with masculinity so I was interested in how other artists see masculinity, play around with it and expose it.”

Combining work spanning 30 years, the exhibition includes images last exhibited in London in the ’70s. Alexis Hunter’s ‘Approach to Fear XVII: Masculinisation of Society – exorcise’ was last shown in London at the Whitechapel Gallery in 1979, the same year it was banned from Ireland. She will also show new, previously un-shown work featuring Stuckist ringleader Charles Thomson.

Del LaGrace Volcano ‘one of instigators of polymorphous perverse queer culture’, according to Tamsing Wilton in An Encyclopedia of Gay, Lesbian, Bisexual, Transgender, and Queer Culture, who has exhibited at the V&A and Courtauld Galleries, will show work never shown before in London.

The exhibition opens on 26th July. Last day to catch it is 7th August. Come to a night of art, performance, discussion and DJs on 29th July – open to all but RSVP. Also film screenings, slideshows and artist talks from Del LaGrace Volcano and Alex Brew on 5th August NB CHANGE OF DATE The gallery is open from 6pm every night bar Sunday. For information go to www.facebook.com/memaskuline