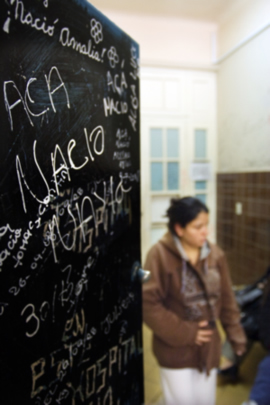 Marianne Mollmann, advocacy director for the women’s rights division of Human Rights Watch, introduces the campaign group’s new report, Illusions of Care (¿Derecho o Ficción? in Spanish). She joined HRW in 2003 as researcher for Latin America and the Caribbean, before which she worked on women’s rights with local groups in Peru. Her work with HRW involves promoting women’s equality and freedom from violence around the world, and one of the key themes I focus on is reproductive health.

In 2004, when I first went to Argentina to research women’s reproductive health rights, I didn’t expect a rosy picture. Argentina only ended an all-out ban on contraceptives in 1985, and some politicians and some medical providers still talk about women as instruments for population growth rather than as autonomous decision-makers.

But even if I hadn’t known all that, the health statistics released by the national health minister told a story of despair. An astounding 40% of pregnancies in the country ended in – mostly illegal and unsafe – abortions. Complications from unsafe abortion have been the leading cause of maternal mortality in Argentina for decades. As a comparison, in most other countries in the region, between 15 and 25% of pregnancies end in abortions. It was obvious that something was very wrong.

No statistics, however, could have prepared me for what I found. Women who had been denied entirely legal abortions to protect their health and who suffered severe health consequences; the women and girls who had been raped and forcefully impregnated by their partners, and still could not get the police to enforce a restraining order; the women who had suffered miscarriages and sought help from a public hospital to contain the bleeding, only to find themselves the focus of police investigations.

But for me, the systematic devaluing of women’s lives and decisions was the most jarring. Those using the public health system were stripped of choices: the medical provider would in many cases decide for them what contraceptive method they would use, or even whether they were old enough, married enough, young enough, had children enough (etc) to use contraception at all.

The women I spoke with did not ask for much. Most of them lived in resource-poor communities and expected to work hard for a living. In fact, many even expected abuse. Many articulated their day-to-day choices in terms of how they could best

feed their children: a package of condoms cost the same as a liter of milk – you do the maths.

I spent the next five years supporting our Argentine partners as they pushed for legal changes within Argentina, and highlighting with international funders and United Nations bodies just how far the situation on the ground was from guaranteeing a life with dignity. These advocacy efforts paid off, at least on paper: spousal and judicial consent for voluntary sterilisation was declared unnecessary, by law, and sex education was made mandatory.

This year I went back to Argentina to see how much had changed for those women and girls who depend on the public health system for reproductive health care. The answer, depressingly, is not much. Government statistics confirm this. The central question is why.

Part of the explanation is linked to the continued politicisation of issues related to motherhood, population growth, and, at the most basic level, sex. Argentina legalised same-sex marriage last month, meanwhile talking about sex is still taboo.

In July 2010, the national health ministry declared its intention to guarantee access to (already legal) abortion. It immediately backtracked after aggressive questioning in the press.

Laws and policies meant to benefit women and girls go unimplemented – such as the legal exceptions to the general criminalisation of abortion, in cases when the pregnant woman’s life or health is in the danger or rape. Key statistics and information are not gathered, not processed, or not shared with existing accountability structures, and when they are not, oversight can’t happen. This indicates how little the government cares that laws and promises remain unfulfilled.

The report Human Rights Watch released yesterday in Buenos Aires, Illusions of Care, focuses on this lack of accountability. Or rather, it focuses on the fact that women and girls, more than a hundred years after the Argentine congress allowed for abortion in certain circumstances, and more than a quarter of a century since contraception became legalised, still don’t have the power to decide whether, with whom or how often to become mothers. I trust in the transformative power of information and the fact that none of the women and girls I spoke to this time expected to be abused. They expect, deserve, and are entitled to better.