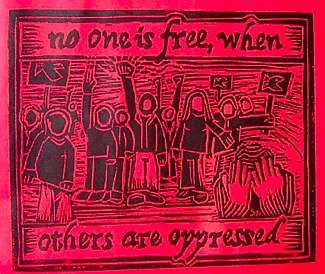 We also know that life changes for all of us whether we like it or not. The fact is that a number of us could find ourselves gaining or losing a large amount of weight. Any of us could become disabled if we aren’t already. If we stay alive, ageing (and therefore ageism) will affect us.

All this (and more) means it specifically matters to feminism that we address all intersecting oppressions on a feminist website. As Pippa’s recent post and the subsequent discussion indicate, many of us experience different forms of oppression. (Some of you will already be familiar with Fatshionista’s excellent piece on why intersectionality matters but if you aren’t, it’s definitely well worth a read.) However, it still remains that the first comment on Pippa’s thread asks what the post is doing on a feminist website. This has got me thinking about how social justice movements work together (or not) and why we sometimes end up boxing ourselves off when so many members of each movement often experience multiple oppressions. I’m still finding my way in all this but it seems to me that some of the biggest conflicts happen when people experience the paradox of a lack of privilege in one area but do not see or acknowledge their privilege in another.

A problem with privilege is that it tends to appear seamless, akin to some miraculous gift bestowed on someone just for being (or perceived as being) male, cis, able-bodied, thin, white, middle to upper class or heterosexual. This means it is often imperceptible to anyone experiencing it. We tend to take any perks that make our lives easier for granted to the point that we don’t even know they’re there. Even when we have our consciousnesses raised so we are able recognise our privilege, it isn’t keenly felt in the way the areas where we lack privilege are. This can make being called out feel incredibly unfair to those of us who benefit from privilege in some ways but lack it in others. Indeed, the daily frustrations we experience from otherness in one or some areas often seem like hassle enough. This means being called to account when we benefit from or fail to notice the privileges we do have can feel like we’re being bombarded with abuse from all angles.

As people willing to name and speak about prejudice, we are often hyper-aware of the discrimination we face and the ways in which this is often denied or hidden. It seems to me that an unfortunate side-effect of this can occur when we end up dismissing forms of discrimination that don’t affect us personally as “not so bad” or somehow more accepted by the public as serious issues: surely a classic example of oppression Olympics. I would suggest a completely justified sense of alienation can unfortunately sometimes lead to perception that one is somehow bottom of the pile and thereby exempt from basic responsibility to be decent or fair and unable to ever oppress anyone. This, in turn, sometimes seems to result in a sense of entitlement in attempts at “safe spaces”, with some commenters demanding that their voices are prioritised as the most important.

Overall, I think we could probably all find examples of instances where people seem to recognise a particular form of prejudice but present sexism as a non-issue but I think it would be difficult to find any movement that hasn’t been undermined by bigots in a similar way at some point. Of course, this leads to another sticking point when highlighting intersectionality: the scarcity mentality that kyriarchy encourages.

Actually arguing for full equality for all with no marginalised group excluded as unworthy compared to the rest feels risky when Conservative ideas about human nature are so ingrained in society. It seems that the idea of no-one being oppressed is actually quite frightening to contemplate because we all arguably benefit when others are viewed unfavourably. It’s hard to imagine a world where this doesn’t happen so it seems every social justice movement is at risk of rejecting the seriousness of other oppressions in order to take care of its own interests and gain the approval of those with the most privilege. But what will happen if all groups insist on doing this? Is this a competition where each group has to go all out to prove their worth by showing their ability to oppress or be seen in a more positive light than “others”?

Energy spent on oppression-Olympics battles is energy that could be better spent fighting all kinds of prejudice together. Pippa was right to talk about her experience of intrusive questions on this site. Equality with men is not just for white, het, cis, thin, currently non-disabled women. We all matter. Every single one of us.

Image shared on Flickr by McBeth, under a Creative Commons license