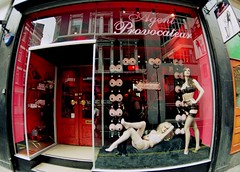 A few days ago, The Sunday Times’ Style supplement ran a story celebrating the success of popular lingerie brand, Agent Provocateur. Written by Kate Spicer, it featured an interview with the current creative director, Sarah Shotton, as well as a history of the company and analysis of its winning formula. Spicer describes the brand as “having clothed the erotic revolutions of the 1990s (female laddism and sex as lifestyle statement) and the Noughties (rampant exhibitionist experimentation)”. As a feminist, I took issue with a couple of aspects of this article, and I’d be interested to hear if anyone else agrees.

To start, the article takes a subtle ‘feminists-are-demanding-and-cross’ stance, which didn’t exactly win me over. Towards the end, Shotton says: “I’m not a feminist. I’m not angry.” A well-trodden path of association, there. More from Spicer: “In the decades before [the ‘90s] it had been all about demanding orgasms and the feminist fight for your right to the ‘zipless f**k’. Sure, it was in-yer-face, but it didn’t seem to be fun or sexy.”

Language like “demanding” and “fight for your right” and even “in-yer-face” paints an all-too-familiar image of feminism as angry, snippy and controversial for the sake of controversy. It’s always easier to remember the people who shouted the loudest and lewdest, but was that really the whole stance of the Second Wave regarding sex? What about awareness and acceptance of female sexuality and sexual equality in terms of pleasure and respect? And, hell, just the fun of it all?

It then goes on to mention how Agent Provocateur introduced “fantastic frillies and split-crotch knickers, not as symbols of feminist oppression, but of female empowerment”. A couple of points here – firstly the idea of sexy pants being part of ‘feminist oppression’ – surely they mean ‘male oppression’? Unless there were loads of Second Wavers forcing crotchless lacies and peep-hole, ribbony bras on their followers? I don’t know, I wasn’t there. I’ll ask my mum.

Secondly, ok, yes, I see that wearing daring and classically stripper-type lingerie can really feel exciting, fun and powerful for some women in their sex lives. So maybe this article isn’t so bad really, although I think the use of the word ’empowerment’ is a bit token. But, just as I was thinking “ok, yup, I get that”, the writer just throws herself, and any argument that this raunchiness can be linked to empowerment, out the window. For the very next sentence is this:

Ay, there’s the rub. Yes, the examples are comically overstated, but the fundamental point remains – you’re nobody if you don’t buy into this notion of sexy. There it is again, the idea that this narrow view of sex and sexuality is the only option. The bottom line for those who don’t conform is this – “Don’t want to take part? Well, then you’re not sexy, or even empowered.”

Where are the choices? Not every woman or man is turned on, or even comfortable, with this very visual, sometimes porny vision of female sexuality. Ariel Levy points out in Female Chauvinist Pigs that, in recent years, it seems Western society’s “interest is in the appearance of sexiness, not the existence of sexual pleasure”. This seems to be applicable here – you mould your appearance and behaviour to a preconceived model. It’s all about the visual, what you project, not what you necessarily feel. There is no room for gentleness, subtlety, or just being relaxed and happy in yourself, which is often the most sexy thing of all.

The journalist goes on to say: “Nobody in academia or at the The Guardian liked it much. But women didn’t care. They were buying it.” But can she seriously argue that it came down to something as simple as independent choice on the part of women? She states herself that only ‘nobodies’ were not complying to this trend, and we know how uncool it is in our society to be left out of the current lifestyle fashion. If women are being sold an idea of what it is to be sexy (and in today’s world, ‘sold’ is synonymous with ‘bombarded’), and with it comes the status of being on-trend, is it really free choice which leads us to buy those crotchless panties and a pole to dance around? For some women, yes. But not for all. Some might say that it’s just a case of supplying the demand. Yes, but where does this demand come from? It’s a classic example of supply (in shops, TV shows, magazines, everywhere) creating demand, rather than the other way around.

I’m for free choice. For me, that’s empowerment. Today, women are freer to express and embrace their sexuality, which is great. But let’s not be so naïve as to say that social judgement no longer exists. It does, and is encouraged by articles like this one – it’s just on the other side of the spectrum these days, judgement about not being sexy ‘enough’ or in ‘the right way’. This recent vision of female sexuality has all the appearance of progress, but lacks the real freedom of it.

Photo of Agent Provocateur store front, by michaelpickard, shared on Flickr under a Creative Commons license