4Thought: “Jesus was a feminist”

Last night’s 4Thought featured Church of England priest Miranda Threllfall-Jones discussing gender, feminism and the Church. Unfortunately the video cannot be embedded, but you can watch it here. Transcript: 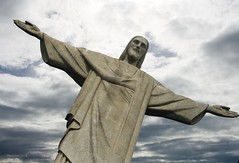 “It does make me angry that there are still people trying to make the Church somewhere that’s not friendly to women. I’m Miranda Threllfall-Holmes, I’m a Church of England priest, I work as a university chaplain at Durham and I have three small children. When we talk about the traditions of the Church of England, we need to be very clear what traditions we’re talking about. Obviously over the last few hundred years, women have been excluded from the leadership of the Church; but that wasn’t the case in the first couple of centuries of the Church. In the early Church it was a very radical organisation, and women had roles as all sorts of things, and we know that they were priests and bishops in the early Church.

In the Gospels, it’s very clear that Jesus radically broke with tradition and treated women in a very radically equal way. When Jesus was in the home of a couple of sisters called Mary and Martha, Martha was making the tea, and Mary was sitting at Jesus’ feet listening to him talk and discussing theology with him, as were some of the men. Jesus said that Mary was doing the right thing, that it was important for her to be there talking with him.

I think Jesus was a feminist, because I think what being a feminist means is thinking that men and women are equal and should be treated as individuals, and not expected to conform to predetermined gender roles. That’s how Jesus treated people; he treated people as equals and individuals.”

Photo by doug88888, shared under a Creative Commons License.