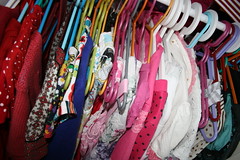 I hate clothes shopping. The whole experience is so migraine-inducingly frustrating for so very many reasons that it often makes me quite genuinely wish I had been born a man.

Essentially, I can really see no good reason why the vast majority of clothes stores couldn’t be taken up with unisex clothing, sorted according to measurements: chest, height, waist etc. For items that need to be tailored to men and women’s specific shapes, why not sell all styles in both men’s and women’s sizes: lacy pants for men who might like to wear something pretty but need a bit more room for their package, nice comfy Y-fronts for women without that unnecessary bulge at the front. Instead, we go ahead and separate out even our socks – socks! – into male and female.

The really very poor reason for this, of course, is that we live in a society where most people are so invested in the lie that men are from Mars and women are from Venus – be that because it’s a convenient way of excusing men from doing the housework or justifying sexual harassment or because many people are just so frightened of breaking from convention that any justification for the status quo acts as a kind of comfort blanket – that we need to do all we can to make men and women seem as different as possible. Combine that with the deeply ingrained view of women as sexual objects and a generous dollop of your common or garden misogyny and you get the tiresome situation in which we currently find ourselves.

Women’s clothing is generally cut to show off or outline the body shape, while men usually get a choice of showing off their figure to some extent (in the last few years, at least) or covering it up with something fairly shapeless. Why do I have to buy the men’s version of a t-shirt in order to get one that doesn’t cling to me? Why does every smart shirt for women have to be tailored? Why does being fashionable on a night out as a teenage girl generally have to involve being cold, exposed and uncomfortable? Why are those wonderfully comfortable camo-style shorts that most guys my age wear all summer only offered to men? Yes, I can go buy a pair for 14-year-old boys, but that only illustrates how nonsensical the situation is.

On the flip side, if a man wants to wear a skirt, or something considered pretty in a feminine sense, he’s got much more of a struggle on his hands. While our sexist culture (with a bit of help from our feminist foremothers) can deal with women wearing “men’s clothes” – after all, why wouldn’t a woman want to be like a man? – the idea of a man wanting to wear clothes designed for women is top comedy fodder. We can just about cope with the fact that some men get off on dressing to look like a woman – there’s a sexual element there, and dudes need sex – but it almost never seems to occur to us that a man might just want to wear a skirt because it makes his legs look good, keeps him cool, is made of pretty fabric or is really quite comfortable.

But while men don’t have the freedom to dress however they want, I’d take that over my position as a woman. I can’t buy the vast majority of the tops I like unless I wear a bra with them to change my body shape, because they’re all designed with the assumption that my boobs will be pushed right up to the top of my chest. If I need some smart shoes, I can choose between painful heels or impractical pumps that offer no protection from the elements (unless brogues happen to be in fashion, as they appear to be now). If I need trainers, I better damn well like pink. If I’m attending a smart social function I’m expected to fork out for a new dress each time, whereas men can just wear a shirt and suit trousers. If I start a new job in an office I’m expected to carefully select a whole bunch of outfits in accordance with the laws set down by Trinny and Susannah, whereas men just need – oh yes – five shirts and suit trousers. Because I’m a woman, I’m supposed to have an innate understanding of how to put clothes together, how to “express” myself with my wardrobe. I should be obsessed with buying vast quantities of clothing that I really don’t need. And I’m considered lazy and a bit of a failure if I don’t.

I realise all these issues aren’t exactly the worst things I could be experiencing in my daily life. There are also arguably much more important reasons why feminists should take issue with the clothing industry, most obviously the fact that the majority of people working in often very poor conditions to produce the clothes most of us wear in the UK are women (please see Labour Behind the Label for details). But aside from the practical aspects of not being able to easily buy the clothes I want and need – and despite the fact that I’ve worked hard to stop myself buying into body fascism – every little one of these issues niggles at me, because it’s a constant bloody reminder of how I’m expected to exist “as a woman”. And the friction between that expectation and my own sense of self is just nauseating

Photo by Becaberry, shared under a Creative Commons Licence.