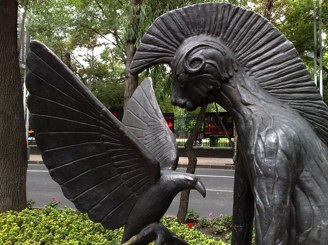 Artist Leonora Carrington is considered a national treasure in her home of Mexico. But the Lancashire-born surrealist is little known in the UK, where no public collection displays her paintings. Susan Gilbert argues more should be done to celebrate her work

This is what the firm voice of an elderly woman said on BBC Radio 3 one Sunday night. Most members of the Radio 3 audience probably nodded sagely at her intelligent if droll pronouncement: they are that type of audience. However it’s a fairly safe bet that before this particular programme was announced, very few of the listeners actually knew who the artist was.

As the programme went on to explain, Leonora Carrington is, at 93, the only surviving member of one of the most extraordinary and revolutionary art movements in the 20th century. This was Surrealism – I mean the original European Surrealism, with a capital S; the Surrealism of Méret Oppenheim’s disturbing fur-covered teacup, of André Breton’s impressively unreadable rhetoric and of Dali’s melting watches. Leonora knew all the Surrealists, was close friends with several, had an intense love affair with one and today still works with her own very personal take on surrealism – with a small s. She is, as the programme pointed out, one of a very few women painters alive whose work sells for more than a million dollars. Her 1947 painting ‘The Giantess’ sold in New York last year for $1,482,500 (£1,080,000).

So why was it that so few of that radio audience, who like me listened with fascination to Leonora’s deep, smoky voice on Sunday 4 July, 2010, had actually heard of her? This question became even stranger when we learned that she was born in Chorley, Lancashire and brought up in that very English county. Her father was a textile magnate; as a young child she lived in the Gothic-styled Crookhey Hall near Lancaster, and was then sent to a series of convent schools. She became the bane of the nuns, was expelled from each school and this became the first clue to her obscurity.