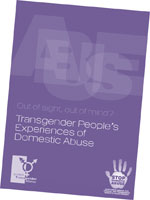 Out of sight, out of mind? – Transgender People’s Experiences of Domestic Abuse

The LGBT Domestic Abuse Project and the Scottish Transgender Alliance have now published their research document surveying the levels and forms of domestic abuse to which transgender people are subjected, and it makes for grim reading.

The 36-page document, called Out of sight, out of mind? – Transgender People’s Experiences of Domestic Abuse, is available from as a 1.1MB PDF file which may be downloaded directly from the Scottish Transgender Alliance website by following this link.

The report reveals extremely high levels of prejudice and abuse in transgender people’s relationships and home lives, coupled with unacceptable negative experiences of accessing fundamental services and support during the times when they are most needed.

As regards the impact that domestic abuse has on trans people’s wellbeing:

Those last two remarks – that DA is “just something that happened” and that it was “wrong but not a crime” – are particularly telling. They point to not only an internalisation of cis society’s busted idea that it’s okay to abuse trans people in every way, but also to a depressing resignation that it’s to be expected because we’re trans. Transitioning should be a positive experience, a connecting with one’s body and finding oneself in the world. No human being should be someone else’s punchbag, simply for being who we are.

The violence against us, in all its myriad forms, has to stop. If we didn’t know the extent of it before, even anecdotally, this document provides damning evidence of a society where transphobic abuse is the norm for 80% of us. It cannot be allowed to continue; things have to change for the better, and soon. Unfortunately, it is not we who have the power to bring about these improvements in our lives. The changes have to start with those who abuse us – and those who condone those abuses by their silence. I only wish I knew how to make it happen.

With thanks to Amy Roch, Domestic Abuse Development Officer at LGBT Youth Scotland, for her help and encouragement.