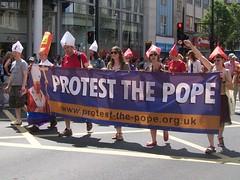 If you’re none too thrilled with the fact that millions of pounds of our money is being spent on the Pope’s state visit to the UK next week (16-19 September) – not to mention the untold suffering inflicted by papal policies and influence across the globe – you may like to join the National Secular Society, OutRage!, Southall Black Sisters and others at the Protest the Pope march and rally on Saturday 18 September:

The organisers charge the Pope with:

1. Opposing the distribution of condoms and so increasing large families in poor countries and the spread of AIDS*

3. Denying abortion to even the most vulnerable women

5. Failing to address the many cases of abuse of children within its own organisation.

There’s also a Nope Pope party taking place in London on Friday 17th September to raise money for SNAP, the Survivors Network for those Abused by Priests.

Photo by anemoneprojectors, shared under a Creative Commons Licence.

*Can I just say I think this is rather poorly worded – people in poor countries have the right to large families too – but the text goes on to explain that an estimated 1.5 million children have been orphaned due to AIDS, and clearly women should be able to control when they have a family and how large that family will be.